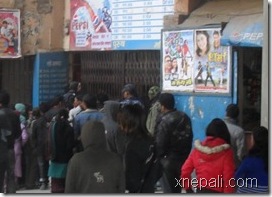 Theaters in Nepal are banned to have morning shows, starting before 11 AM. The Film Development Board‎ of Nepal (FDB) has decided to act as moral police to stop the college kids from bunking classes to go to the movie theaters.

But, are the movie theaters the only reason college kids bunk classes?

How about the restaurants? Public parks? or what about the shopping malls where kids can be seen in their uniforms.

I think the government should seek the root cause the kids go to theaters instead of college. May be the college are not that interesting. Stopping movie theaters from having morning shows doesn’t stop the kids from going in the 11:00 o’clock show.

I don’t think this new rule will do any good to the students. The parents or the government officials might feel a false sense of relief, but there are tons of other similar excuses to bunk classes.

What rule will they make if they start to gather in one of the student’s place and watch movies in TV?

What is the solution, then?

FDB should instead start public awareness campaign to stop school kids from visiting theaters instead of college. TV ads, radio, and print media ads about the importance of education would give a positive message to the youth.

Such campaigns will also have a better and long-term impacts on the students.

If you don’t know, the Film Development Board (FDB) is a regulatory body of the government, established on 30 June 2000 by the Government of Nepal according to the existed Motion Picture (Production, Exhibition and Distribution) Act.