In an effort to provide so-called ‘celebrity cards’ to the Nepali film makers, Nepal government has completed the first phase of the distribution of the identity cards to some of the senior-most film makers. In an event organized in Singh Durbar on April 18, 2016 minister Sher Dhan Rai handed over film artist cards to 13 senior most film artists. Video report:

According to the Film Development Board (FDB) three categories of identity cards will be distributed among the film artists. The senior-most artists are handed over the Red Card – a card that is permanent and doesn’t need to be renewed. The senior artists will be offered Blue Card and the general film artists will get a Green Card. Unlike Red Cards, both Blue and Green cards need to be renewed every  five years.

According to the FDB officials, the card holders be offered special treatment and honour by the government based on their card type. Other typed of the identity cards are also expected to be distributed within a month. 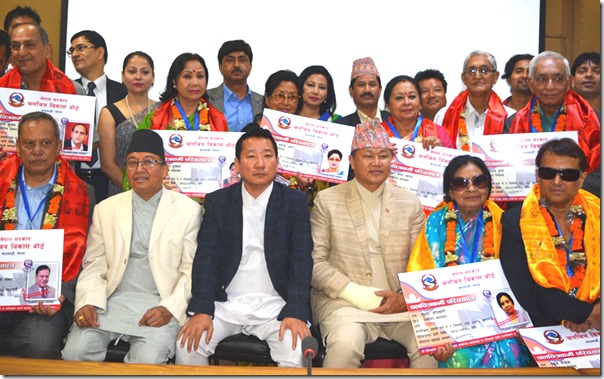 UPDATE:
Kantipur Daily published an editorial article regarding the distribution of celebrity card. I have attached a copy of the article for reference.