It seems, Nepali film makers have decided that poster plagiarism is one of the marketing strategies. Although morphing of posters are criticized by almost everybody, remotely interested in Nepali movies, more and more movies are repeating the same thing.

The last movie we wrote about such poster copy was of ‘Wrong Way’, posted less than two weeks ago. Our readers, who otherwise wouldn’t know about the movie at least knew that the movie features Jiya KC and is being made.

We guess, the producers of ‘Producer’ knew about the free publicity and have released their own copy-paste poster. And, we fell for them and are posting their poster with the original (Shim Ant shared it in our Facebook page.) The photoshoped copy of the poster of an Alex Gibney’s film ‘Casino Jack and the United States of Money’ is made by adding a six Nepali faces in it. 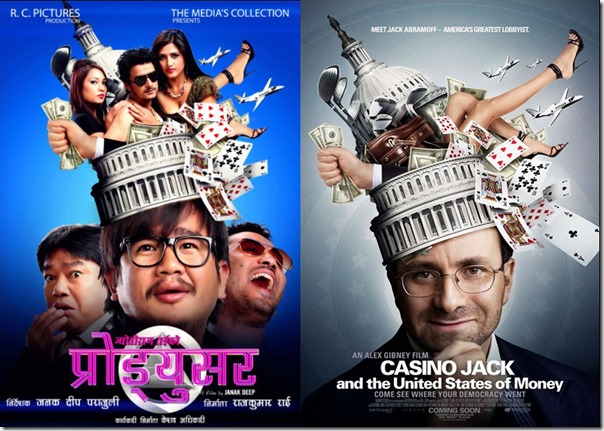 Now onwards, we at xNepali will try to discourage such a trend in Nepali movies by not talking about the movies or their names.

We hope the film makers will realize that such unethical practice won’t help in film promotion.