Actress Priyanka Karki went to the USA right after the engagement. In fact, she has postponed the ticket to accommodate the engagement with her boyfriend, Ayushman Desraj Joshi.

Now, she is choreographing the contestants of Miss Bhutan USA 2018. While training the contestants, she had enjoyed some time at the swimming pool and shared some hot swim suit photos. Here are some of the photos she has shared in her Instagram post.

Priyanka posing in bikini is not a new thing. She had posed with her future mother-in-law in past. A video report about her relationship in her future home:

While in USA, Priyanka says that she trains the contestants from 10 in the morning to 5 in the evening and goest to the pool at 6 PM. 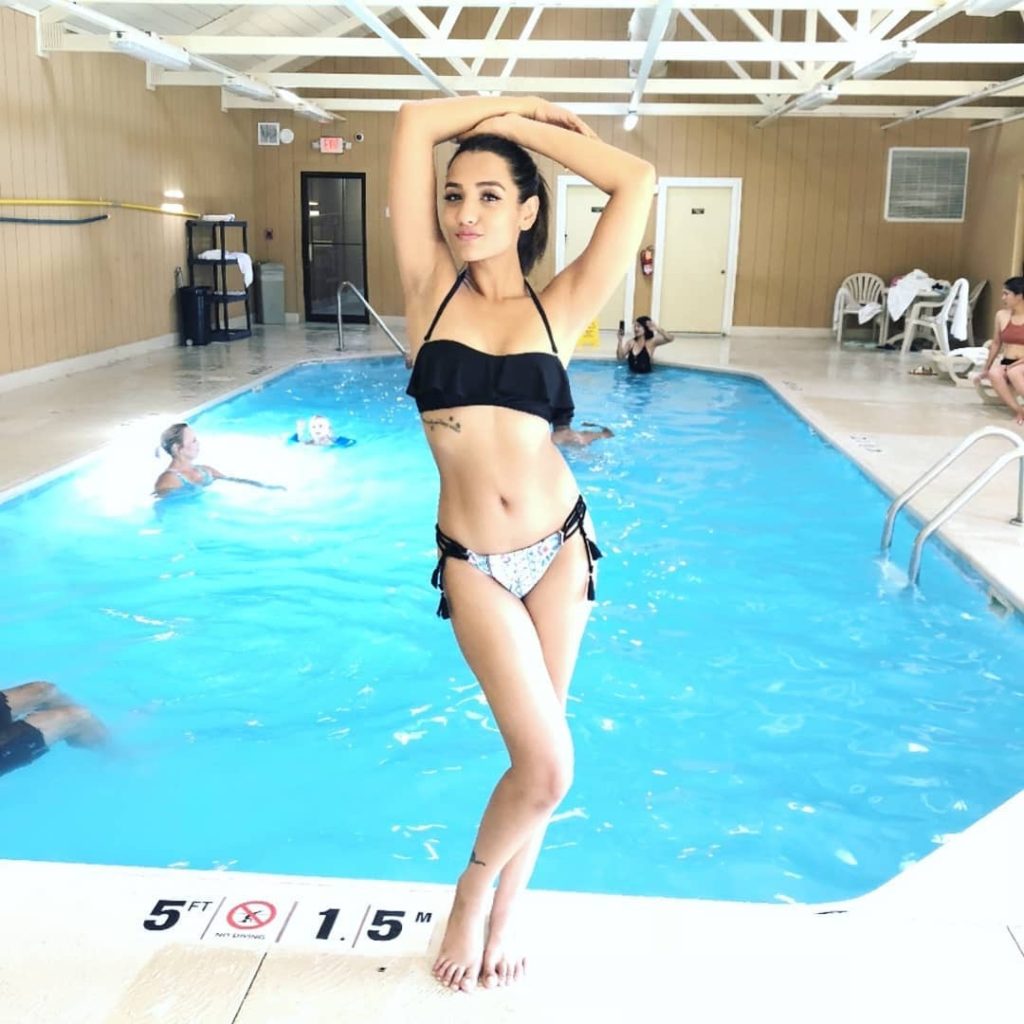 After reaching USA Priyanka wrote about the engagement and about Ayushman and their relationship in the following post:

Thank you for all your love, wishes and blessings. This is an exciting new chapter of our lives and we are very happy, very much in love, and looking forward to this new energy entering our lives. Changes are happening, everything is aligning and we feel a new beginning coming towards us and we are absolutely running to it with arms wide open ❤ #thankyouuniverse✨🙏 #ayanka 💍🥂

And the love story:

These are the contestants of Miss Bhutan USA 2018:

About the contest being named Miss Bhutan USA and all of the contestants being Nepali by origin there seem to be discussion about them not being Bhutanese. But, they are originally from Bhutan – some were born in Bhutan and others born in exile. When Bhutan wouldn’t take them back, they were brought in by the US government as refugee.

“Bhutan is a country my parents are associated with. Nepal gave us a place to stay and it’s a place I was born, that’s all, period. Nepal was obligated to give us refuge, but took the freedom of living a normal life. Nepal denied the refugee right to movement. We werent allowed to get job outside the camp, we were segregated and discriminated. We depend on international community for survival. We are ethnic Nepali. Woman in the camp were harassed and mistreated. I can go on and on about it. If a family give you refugee, but treated you the way other treated us: restrict you from your own freedom to go places, do things, made you find your own resources, violate your mother than sisters, insulted you and your family every time you go to market, would you be proud to be part of that family? Would you want to be associated with them?

… You know when your a kid, your innocent and naive. People can mold you and make you into whatever they want. So when you grow up in such situations, you grow so fast that you miss half of your childhood. When your home fearing whether your mother might or might not return from gathering food or woods because there was men out there who would chase them out from the places and take advantage of them or lock them up for gathering dried woods when other native Nepali woman can do that without worrying. Once again, you don’t know how someone feels unless your in their shoes. Seeing things I saw since I was a kid, it has changed and defined my thoughts about the place I lived. Yes, Nepal is the place I would miss the most because it has memories that can be never be recreated and experiences that can never be redone. But it’s a place where it opened my eyes in young age.”