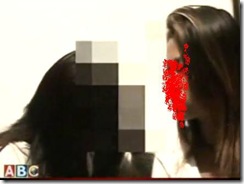 In a latest news about a couple of schoolgirls being arrested for prostitution in Kathmandu, a local TV has been criticized for divulging too much information of the girl while dramatizing the issue.

On October 2, 2010 police arrested two girls from Town Plazza in Naxal. Two pimps named Sanjiv Lama and Som Bahadur Tamang were also arrested with the girls. It is told that they used to charge Rs. 50,000 for a night to customers, however, the girls got only Rs. 10,000. But, the issue is not about prostitution or, cheating the prostitutes, it is about how our journalist cover the news.

The interviews with the girls don’t make much sense. And, the blurring on the faces of the girls were located in wrong places, multiple times. It looks more like advertising the call girls and their school.

I have embedded the video available in YouTube below to show how they have presented the issue.

I request everybody to flag the video on YouTube. Thanks.