Miss Nepal 2012 and ‘Gajalu’ debut actress Shristi Shrestha met with an accident and was admitted to a hospital in Kathmandu. Shristi later confirmed the accident by sharing a photo of herself with a cast on her hand. 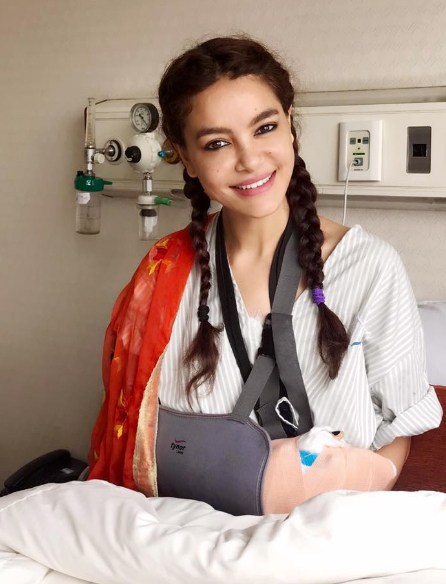 As expected, the accident caused various types of rumours in the film industry. Let me list out the rumours that went around:

To clear the issue Shristi shared her photo and a short statement about her condition.

What happened to Shristi Shrestha?

According to Shristi’s statement in Facebook, she was struck by a falling Cupboard in Pulchowk apartment on July 1. She was rushed to Norvic hospital and she went through a surgery. Shristi wrote:

Hi everyone, thank you all for your concern. I just wanted to let you know that I had a little acident. But, I am well and recovering. My cupboard hand I had a bit of an altercation and I hurt my right hand. But, after a minor surgery at Norvic, I am now ell on the road to recovery. I look forward to getting back to work and finishing the few scenes left in Laure as soon as possible.

The accident happened on Saugat’s Birthday. In his Facebook, Saugat has deleted all the photos from his Facebook profile and request people not to spread any rumors.

According to reports, Saugat had requested the ‘Lahure’ team to delay Shristi’s shooting by a couple weeks and he had also stated that Shristi  has nothing to do with the controversy between the director Nigam shrestha and Sunil Rawal the producer.

I with Shristi a quick recovery !