The movie by JS Media, ‘Traash’ is a movie by noted comedy singer Prakash Ojha. The movie is made on horror and thriller theme. Actress Jharana Thapa is featured in special appearance. The movie is edited by Himal Joshi, cinematography by Roshan Shrestha, action by Pradip Khadka, choreography by Prunam Rai, the story is written by Prakash Ojha himself and the screen play is written by Maunata Shrestha.

END_OF_DOCUMENT_TOKEN_TO_BE_REPLACED

After two weeks of no-release of Nepali movies, a thriller comedy movie ‘Trash’ is going to release in theater this Friday on January 3, 2014.

Update, in a short audio clip the director Prakash Ojha explains what the movie is all about:

The movie directed by comedy singer Prakash Ojha features Nirajan Luitel, Ayub KC, Anu Shah, Riya Shrestha and others. The movie will release in theaters all over Nepal. The lead actor Nirajan is the younger brother of actor Jiwan Luitel. The movie will also have an special appearance of Jharana Thapa.
END_OF_DOCUMENT_TOKEN_TO_BE_REPLACED 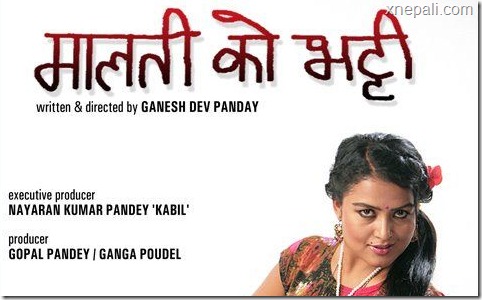 The movie ‘Malati Ko Bhatti’ is the story of Aditya Sharma (Jiwan Luitel) frustrated with his life due to his unsuccessful love-marriage. Aditya’s wife, Sabitri (Nandita K C) is more fascinated towards parties, clubs, casino and gambling rather than her family. Aditya drinks a lot and becomes addicted to alcohol. He met Malati (Rekha Thapa) while visiting a small bar owned by her and known as Malati ko Bhatti. While visiting the Bhatti, Aditya and Malati got attracted towards each other and started a relationship.