Voice of King Mahendra
Address to the nation during his 2017 BC coup. And, Nepali language address to the British parliament.

A rare photo of KP Oli, prime minister, with King Birendra in the following video:

Although I am no fan of monarchy, I appreciate King Birendra as a person. The royal massacre, that killed almost all of the royal family, was one of the most deadly and mysterious incident in the history of the world.

On his birthday, let me wish his soul rest in peace. Let’s go back in time and watch a few remarkable photos of the late king and the royal family of that time.
END_OF_DOCUMENT_TOKEN_TO_BE_REPLACED

Indra Rajyalaxmi died in a mysterious circumstances on September 4, 1950. According to the official website of the first maternity hospital, Prasuti Griha, the princess had died because of the complications caused by the birth of her last child, Dhirendra Shah. But, Dhirendra was born on January 14, 1950.
END_OF_DOCUMENT_TOKEN_TO_BE_REPLACED

I prepared a video on the only remaining blood relatives of King Birendra – his grand daughters, Surangana Rana and Girvani Rana. The daughters of Pricess Shruti are studying in India and are away from media attention. At the time they lost their mother in Durbar Hatyakanda in 2001, Girvani was just 3-years old and Surangana 7-months old. After 7 years of that ill-fated time, their father, Gorakh, also married another mother. (I had also written about them two years ago)

Both Surangana and Girvani studied in Kathmandu till their grade 4. In the fifth grade they went to Dehara Dhun, India for the rest of their schooling. Now, 20-years-old Girvani is doing her bachelors in Bangalore. 17-years old Surangana is finishing her school years in Dehara Dhun.

I am writing this post to share some interesting comments in the video. Some of the viewers have suggested that the royalty should be re-installed and the eldest should be installed as a constitutional queen. Although such thing is not possible in the current time, these comments are really insetting.

Then Crown Prince Birendra Bir Bikram Shah and Crown Princess Aishwarya of Nepal wait in Frankfurt airport during their honeymoon tour of Europe in 1970. 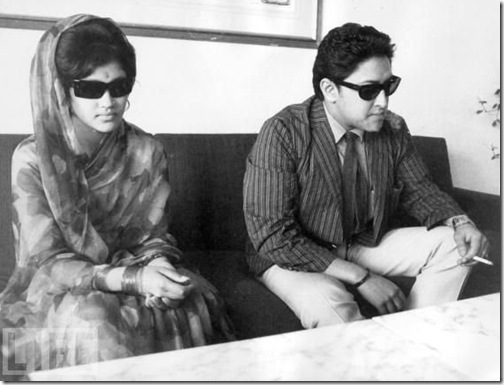 Birendra Bir Bikram Shah Dev, then Crown Prince of Nepal married Aishwarya in 1969 (Birendra and Aishwarya were second cousins). She became the crown princess of Nepal after marriage.

After King Mahendra died in 1972, Birendra became the new King and Aishwarya became the Queen of Nepal. They ruled the country until their death in 2001 in Royas Massacre. Aishwarya was told to be more active and dominant to the King.