After a couple of weeks without any new releases, Nepali film makers are releasing four new movies on January 10. At least, three out of the four movies are considered big names in the Nepali movie industry. 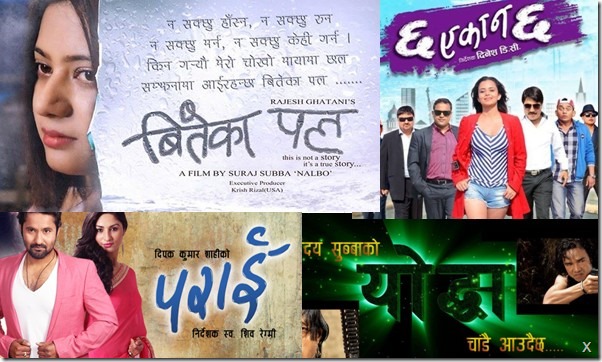 The movie ‘Biteka Pal’ by noted director of successful movies like ‘Bato Muniko Phool’ and ‘Sayaad’, Suraj Subba ‘Nalbo’ is known to make good movies. Although his last movie ‘Facebook’ didn’t do well, the current release has created a buzz before the release. In addition to a good director, the movie also features new and talented actors like Keki Adhikari and Baboo Bogati in leading roles. Keki Adhikari was highly appreciated by the audience during the premier show of the movie on the last week of 2013. The songs of the movie are also liked by the public.

Another movie ‘6 Ekan 6’ features well known comedy actors of television serials. The movie is also promoted heavily in television and on street. The viewers have high hopes from the comedy movie. The movie features Neeta Dhungana, Deepak Raj Giri, Shiva Hari Poudel, Kedar Ghimire, Sitaram Kattel, Jitu Nepal and Sanjeev Chhetri in main roles.  The actors are the leading actors of the popular comedy serials ‘Tito Satya’, ‘Jire Khursani’ and ‘Meri Bassai’. If the director Dinesh DC has done a good job, the movie should be a collection of cream talents in Nepali comedy artists.

The movie of late director Shiva Regmi, ‘Parai’ is also expected to attract viewers because of the sentiment of the death of the director. The movie features Gobinda Shahi, Niraj Baral, Nandita KC and Garima Pant in main roles. The director is known to make good movie and the artists are also well known artists, liked by viewers.

Uday Subba’s ‘Yoddha’ features Rajesh Hamal, Subash Meche, Jharana Thapa, Sunil Thapa, Dinesh Sharma etc. in main roles. The movie is targeted to single screen audience. There are some Nepali movie viewers who consider this movie only because of the star power of Rajesh Hamal and Jharana Thapa.

All four movies have good potential to be successful. But, the viewers of Nepali movies are limited and they also have to be divided into four movies. So, there is a high chance that none of the movies become as successful as expected.

Based on the initial response in media, we believe, at least three of them would have done good business if they were solo releases. We would need to wait for a couple of days before the fate of the movies are determined.

2 thoughts on “Big films testing their luck this Friday”