This week on January 15, 2016 two new Nepali movies are releasing in theater. Both the movies – director Sabitri Khatri’s ‘Kafal Pakyo’ and Suwarna Thapa’s movie ‘Fanko’ were highly publicized movies. Both the movies were shown to the Nepali viewers in foreign countries before their official release. The movies are being released on Magh 1, the Makar Sakranti festival in Nepal. 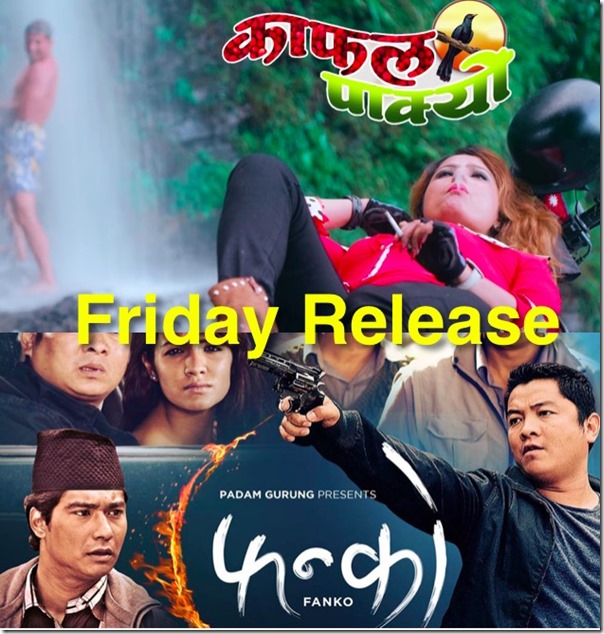 The movie is made on comedy theme. The movie shows the travel from Kathmandu to Gulmi in romantic way. The Actor Jiwan is featured as a village guy and actress Barsha Raut is featured as a modern tom-boy. The relationship between the two is the whole movie.

Watch the trailer of the movie

Nepali movie ‘Fanko’ is a presentation of Hetauda Movie Makers. One of the songs of the movie ‘Thungde Thungde â€¦’ has been quite popular. The movie features Saugat Malla, Keki Adhikari, Dayahang Rai, Priyanka Karki, Anup Baral and A Gurung in lead roles. The movie featuring the music of Chetan Sapkota is a suspense movie with comedy and thriller. The movie is about a vehicle transporting black-money from Pokhara.

Keki is featured as wife of Saugat Malla. Priyanka, A Gurung, Anup Baral and Dayahang Rai try to snatch the black money. The movie also features an item dance of singer Indira Joshi. The item song is the debut of the hot singer as an item girl in Nepali movie industry.

The director Suwarna Thapa had previously directed a movie with lesbian characters – ‘Soongava’. In contrast to the art movie ‘Soongava’, today’s release ‘Fanko’ is a commercial movie.

Watch the trailer of ‘Fanko’