The princess of the past and the social worker of the present, Himani Shah, has moved to Dolkha for her first major social working through her own NGO, Himani Trust. During the ten days long stay in Namdu village, she will help the development activities in the district including education, health and drinking water. The most important part of her stay will be the interaction with the local people plan accordingly. 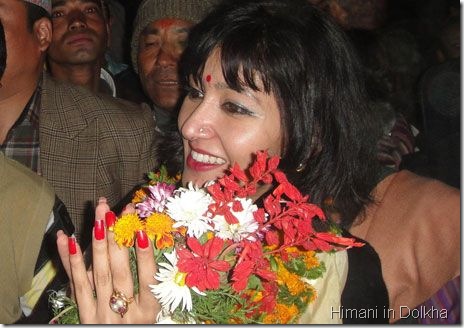 On Thursday, Himani will handover the barbed wire to be installed on the sides of a bridge on Tamakoshi River. The secretary of the Trust, Paw
ana Shah, told that the Trust had spent Rs. 150K to purchase the 150m long barbed wire and 30 Kg binding wire.

Himani Trust was recently registered and was inaugurated in October in a lavish ceremony held in a 5 star hotel in Kathmandu. Recent activities of the princess of the past is suspected to be the result of royalty using the one and the only clean person in the family, dubbed as playing Himani Card.