A journalist / news reader Komal Oli has been a successful singer. Now, after two decades of singing, the unmarried singer is going to venture in a new field, acting.

Komal was also present in the press meet to confirm her role in the movie.  At first, Komal was only asked to sing in the movie. Later, they decided Komal would be great addition in the story and hence she got the role.

The movie to be presented by Color Movie is told to be based on real life story. The movie will feature Ganesh Upreti, Rashmi Bhatta, Arju Adhikari, Bishal Pokhrel. Produced jointly by Ram Prasad Shrestha, Kalyan Dahal and Sambhu Thapa will debut Rajiv Manandhar as the cinematographer.

Komal’s role in the movie is only a  "special role" so don’t expect much from her in the movie. But, this is not all, she is not going to stop there. Komal told that she has a plan to make a film about unmarried women like herself. She didn’t tell if she will be the lead actress, but one thing is sure, she will be more involved in Nepali movie industry in future. 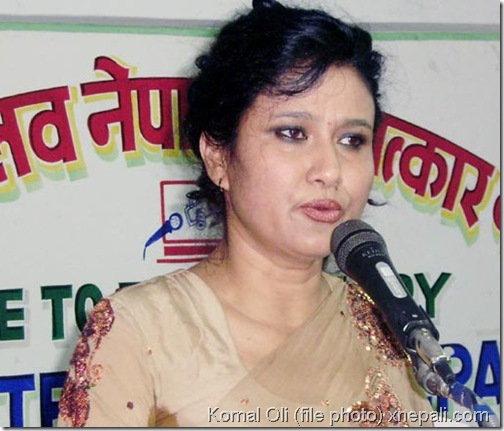