When Rekha Thapa’s ex-husband Chhabi Raj Ojha went to Rekha’s upcoming movie ‘Rudra Priya’ premier with his to-be-wife Shilpa Pokharel, Shilpa and Rekha met and hugged each other. Chhabi and Shilpa went together but refused to be photographed together in the program.

The premier show of Rekha’s movie was held on October 16. The Rekha Thapa and Aryan Sigdel starrer movie is releasing on this Friday. In the premier Chhabi didn’t go to the stage but Shilpa went to the stage to meet Rekha Thapa. Rekha received Shilpa with a smile and hugged her. The scene was interesting as Rekha was an ex-wife of Chhabi and Shilpa is going to be wife in near future.

It was the first time these two actresses have met each other in a public function. Although journalists had requested Chhabi Raj Ojha to go to the stage and pose for the photograph with his ex and future wives, he refused.

Shilpa had entered Chhabi Ojha’s camp after Rekha had divorced after a decade long marriage and started her own production business. 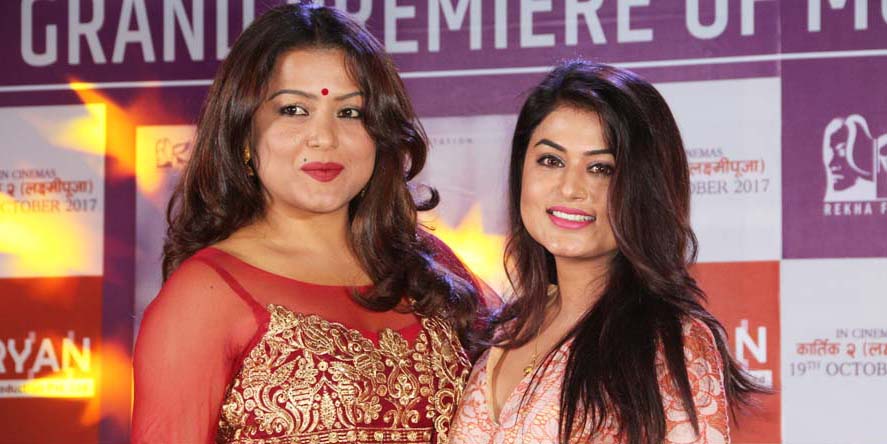 ‘Rudrapriya’ is releasing on Kartik 2 on Laxmi Pooja. The premier show was held on Monday at Kumari Theatre in Kathmandu. In the premier show the main actors of the movie Rekha Thapa, Aryan Sigdel, Rajan Ishan, director Sudip Bhupal Singh, producer Ramesh MK Poudel were present. Actress Rekha was with her mother Saraswati Thapa.

Rekha Films was registered by Chhabi Raj Ojha after a new banner had to be registered after his previous partnership broke. Chhabi registered his own banner after Rekha took the banner with her after they broke up. Now, Chhabi’s movies are being produced under Chhabiraj Films banner and Rekha’s film under Rekha Films banner.