The shooting of the Raju Giri movie, ‘Bindaas 3’ has re-started after the delay caused by the devastating earthquake of April 25. To produce the third sequel of the movie ‘Bindaas’, Raju has teamed up with actress Suvekchya Thapa. This is the third venture of Raju Giri with the actress after ‘Makhmali’ and ‘Tiger the Real Hero’.

In both of the sex-themed movie’s previous sequels, hot actress Sushma Karki was featured in leading role. In the third sequel, Sushma is being replaced by Suvekchya. (click to watch ‘Bindaas’ and watch ‘Bindaas 2’) 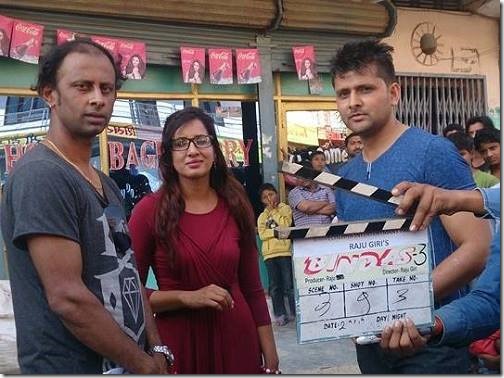 At the end of 2014, Sushma Karki had announced that she will no longer work in sex-themed movie. It is suspected that she had made such an announcement as she wasn’t included in the ‘Bindaas 3’ team (read about it in Nepaliactress).

‘Bindaas 3’ shooting had started in April ( read about the start of the shooting). After the earthquake, the shooting has recently resumed. The movie features Ashok Phuyal opposite to Suvekchya. Manish Karki, Sandeep Sapkota, Dinesh Shahi and others are also featured in the movie. The movie features music of Arjun Pokharel, choreography of Kranti KC and cinematography of Mukesh Humagain.

‘Bindaas 3’ is expected to be released in Tihar festival.

One thought on “Shooting of Bindaas 3 starts again, Sushma replaced by Suvekchya Thapa”