This is the third sequel of Nepali movie ‘Bindaas’. The movie made on sex theme featured actress Sushma Karki in the first and the second sequel. In the third sequel Suvekshya Thapa replaced Sushma Karki. Although the movie was made into three sequels, none of the movie were successful commercially and the review of xnepali reviewer wasn’t that good either. The initial comments in the video are not good. The movie is a Raju Giri Production & Shuvechchha Entertainment presentation featuring the music of Arjun Pokharel, editing and cinematography by Basu Baral.

There are four new Nepali movies being released in theater on Friday, February 5, 2016. It is a huge crowd of Nepali movies in theater. Its going to remain crowded as more new movies are being released in coming days. The movies to release this Friday are ‘Kaifiyat’ with actress Nandita KC in leading role, ‘Superhit’ with actress Binita Baral in lead role, ‘Bindaas 3’ with Suvekshya Thapa in leading role and ‘Kasailai Nabhannu’ features Dinesh Sharma and Aayushma Karki in lead roles. All these movies are believed to be targeted to single screen audience. 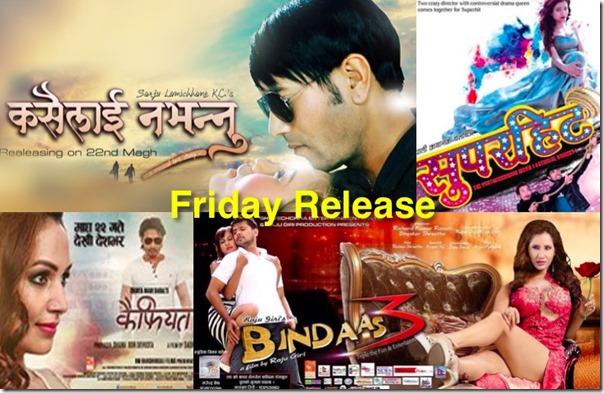 The movie directed by Dasharath Giri, ‘Kaifiyat’ features Nandita KC with Shankar Shahi Thakuri and Sajana Thapa. Actress Nandita had told that her role is a suspense in the movie (Nandita is featured in a double role in the movie). She was talking in a press meet to tell about the movie. The music of the movie is expected to attract the viewers to theater.

Listen to the the audio jukebox of ‘Kaifiyat’ here.

END_OF_DOCUMENT_TOKEN_TO_BE_REPLACED

UPDATE: After the protest of various Sherpa organizations, Suvekshya Thapa has apologized for the mistake and has told that she had no intention of hurting Buddhist people. In the mean time, various organizations had asked Thapa to be punished for undermining their faith and beliefs by using holy Khada to cover her body parts.

Actress Suvekshya Thapa is known to create controversy for the promotion of her movies. Like her previous movies, Suvekshya has chosen to show off her body to promote her upcoming movie ‘Bindaas 3’. In the photos published in onlinekhabar, Suvekshya has covered her body under religious shawl-like cloth – ‘Khada’. ‘Khada’ is used to honor and appreciate people and it is also offered to the god in Buddhist culture. 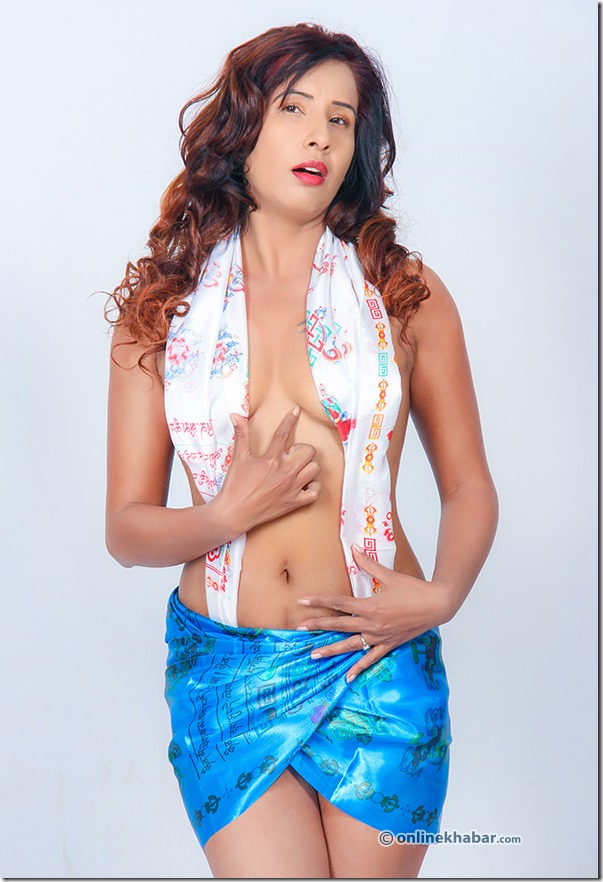 In the photos, Suvekshya has wrapped a blue khada to look like skirt and a white one to cover the upper body parts. She is well covered and this looks a lot better than the photos she did for the promotion of her previous movie ‘Miss Nepal’. The promotional photo of her earlier movie was copied from Bollywood actress pose in which she had used a fish to cover the upper part of her body.

END_OF_DOCUMENT_TOKEN_TO_BE_REPLACED

Nepali year 2072 BS started on Tuesday, Baisaksh 1 (April 14, 2015). No new Nepali movies were released on the first Friday of the new year, on April 17. On  the second week, April 24 new movie ‘Resham Filili’ was released and previously released film ‘Jhola’ was also re-released. On the very next day, devastating earthquake hit Nepal and and halted all the film activities for the next few months. 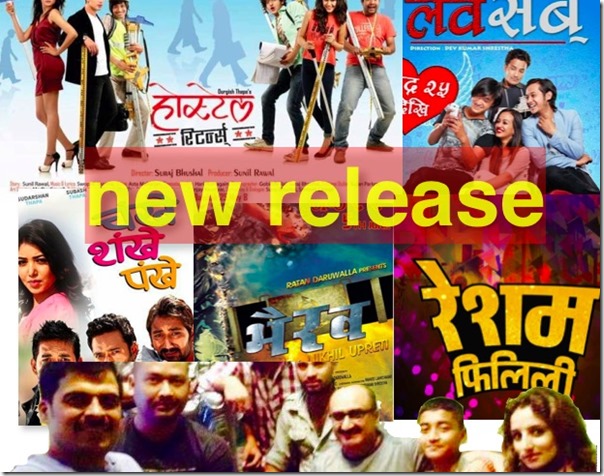 END_OF_DOCUMENT_TOKEN_TO_BE_REPLACED

After Karishma Manandhar and Sushma Karki, actress Suvekchya Thapa has also added a tattoo on her chest. While Karishma has a tattoo of a rose on the top of her left breast, Sushma has an image of the sun, Suvekshya has chosen two Nepali flag to show her love for the country. (we had also compared Sushma and Karishma’s tattoos)

In addition to two crossed Nepali flags, she has also written ‘I love Nepal’ all in capital.

It is to be noted, in Suvekshya’s latest film ‘Bindaas 3’ she has replaced the actress with tattoo on breast, Sushma Karki. The tattoo of Sushma had also created controversy during the release of ‘Bindaas 2’.  In a question if the tottoo was the requirement of the story of the movie, Suvekshya told that it was not. She told, “I had always wanted to have a tattoo.” ‘Bindaas 3’ is releasing on October 3.

END_OF_DOCUMENT_TOKEN_TO_BE_REPLACED

The third sequel of the hot movie ‘Bindaas’ is scheduled to release in Tihar, on October 6 (Kartik 20). The shooting of the movie has recently completed and the first-look poster of the movie has been released as the movie goes into post-production. The movie directed by Raju KC features actress Suvekchya Thapa instead of the actress of the previous two sequels, Sushma Karki. 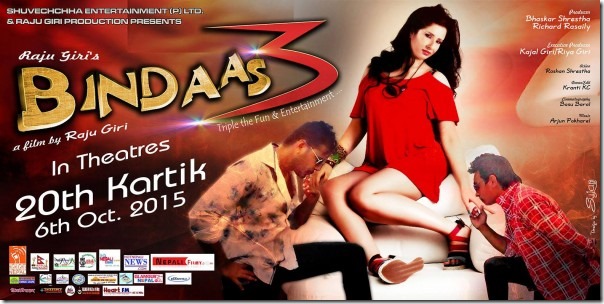 Director Raju Giri is known for featuring hot scenes in movies and controversial relationship with movie actresses has also featured such scenes in ‘Bindaas 3’. The movie features actress Binu Khadka and Suvekchya in hot bed scenes.

END_OF_DOCUMENT_TOKEN_TO_BE_REPLACED

The shooting of the Raju Giri movie, ‘Bindaas 3’ has re-started after the delay caused by the devastating earthquake of April 25. To produce the third sequel of the movie ‘Bindaas’, Raju has teamed up with actress Suvekchya Thapa. This is the third venture of Raju Giri with the actress after ‘Makhmali’ and ‘Tiger the Real Hero’.

In both of the sex-themed movie’s previous sequels, hot actress Sushma Karki was featured in leading role. In the third sequel, Sushma is being replaced by Suvekchya. (click to watch ‘Bindaas’ and watch ‘Bindaas 2’)

At the end of 2014, Sushma Karki had announced that she will no longer work in sex-themed movie. It is suspected that she had made such an announcement as she wasn’t included in the ‘Bindaas 3’ team (read about it in Nepaliactress).

END_OF_DOCUMENT_TOKEN_TO_BE_REPLACED

The chemistry between the director Raju Giri and actress/producer Suvekshya Thapa has has been quite good these days. After making ‘Tiger the Real Hero’, these two had teamed up in the production of ‘Makmali’. And now, it is the hot ‘Bindaas’ sequel ‘Bindaas 3’ even before the completion of the shooting of ‘Makhamali’.

Raju had directed previous two sequels of ‘Bindaas’ but Suvekshya wasn’t involved in any of them. Now, Suvekshya seem to be featured in place of the hot actress of previous sequels, Sushma Karki. (click to watch ‘Bindaas’ and watch ‘Bindaas 2’) In the movie, Suvekshya will romance with Ashok Phuyal. Other actors in the movie include Sudan Dhital, Dinesh Shahi and Sandip Sapkota.