It was not only the youngest, Jordan Romero, on the top and Himalayan Tiger, Apa’s 20th summit, there is yet another climber to remember who scaled the top of the world. The world traveler on bicycle, Puskar Shah, hoisted the flags of 192 countries he visited on May 17, 2010. 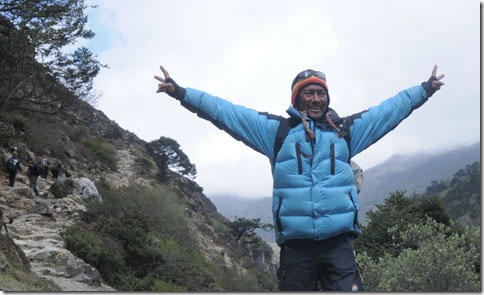 It was not only the flags he carried to the top of the world but also the front wheel of his bicycle. He also sang a popular Nepali song â€œResham Fiririâ€ and remembered his mother during his 45 minutes stay at the peak of the 8,848m mountain.

Puskar said, â€œWhen I embarked on the world tour in 1998, I had a goal of hoisting the flags of all the nations for peace.â€

The 42-year-old, Shah said he has accomplished his mission and he is very happy that his world tour for peace has been a success.

END_OF_DOCUMENT_TOKEN_TO_BE_REPLACED

Puskar travelled 150 countries on a bicycle and now the bicycle is on sale along with other stuffs like flags, soil, coins, post stamps, and beer caps. The auction of the stuffs he collected from different countries he visited will take place in United World Trade Centre, Tripureshwar. 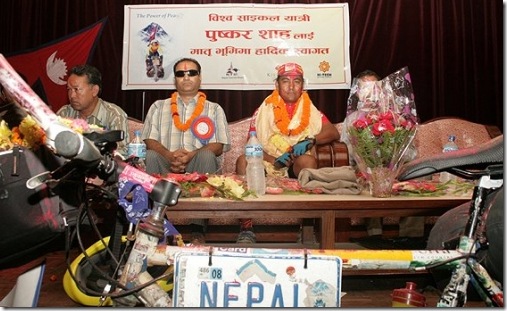 Puskar had promised to carry flags of all the countries he visited to the top of the World â€“ for which he needs cash. He needs about Rs. 4 million to climb the highest peak, Mount Everest, towards the royalty and other costs.

END_OF_DOCUMENT_TOKEN_TO_BE_REPLACED 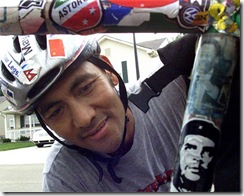 November 29, 1998 was the big day Puskar set out on an 11 year journey on a bicycle with NRs 100 (about $1.50) in his pocket. After travelling 150 countries in Asia, North America, South America, Africa, Middle East, and Europe now he has announced that he has completed his journey.

Now he has his ultimate dream :

I would like to climb Mount Everest in 2010 bringing the national flags of all the countries I will have visited by then to the summit.

LetÃ¢â‚¬â„¢s wish him luck and we know he would do what he says he will.