This Friday, on February 27, two new movies are releasing – ‘Ajhai Pani’ and ‘Mission Paisa Reloaded’. The last film of the late director Alok Nembang, ‘Ajhai Pani’ was premiered three days before the release among film artists and journalists. 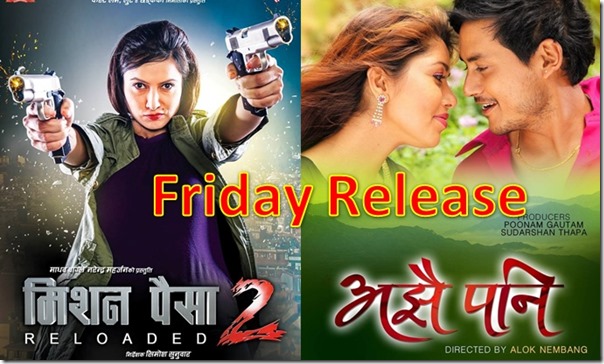 The sequel of the movie ‘Mission Paisa’ (watch the original ‘Mission Paisa’) is an action comedy movie by director Simosh Sunuwar. The movie features Nisha Adhikari, Amir Gautam, Resh Marahatta and Harshika Shrestha in leading role. The script of the film is written by Prachanda Man Shrestha and is jointly produced by madhav Wagle and Narendra Maharjan. The censor board has awarded a PG certificate to the film.

The movie ‘Ajhai Pani’ is awaited film being one of the creation of one of the greatest directors of Nepali film industry, Alok Nembang. The death of Alok has also attached the sentimental aspect of the viewers towards his last film. Known for well-liked film like ‘Sano Sansar’ and ‘Kohi Mero’, there is high expectations of viewers from the film.