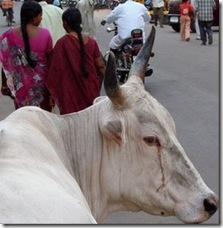 It was back in May 18 of 2006, Nepal was pronounced a secular state and was no longer the ‘only Hindu nation in the world’. But, a news published on Nov. 5 in Kantipur and Himalayan Times implies that Nepal is still a ‘Hindu Kingdom’ in practice.

Then, why is a Muslim arrested for selling cow meat? Is it only because Hindu (80% of the population) don’t eat it? Well, Muslims don’t eat pigs. Does that mean butchers selling pig meat should be arrested ?

As long as the Muslim gets customers for his cow meat, it is nobody’s business to interfere on his rights to do business in secular Nepal. What surprised me more was, the leading newspapers like THT and  Kantipur consider the news a ‘crime’. Attached is the screenshot of the news from online edition of Kantipur. 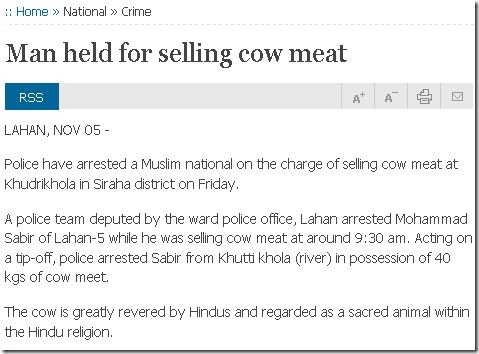 Disclaimer: I am a Hindu, and I don’t eat cow meat.