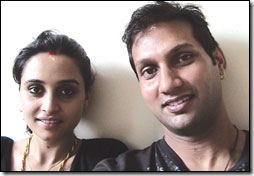 It was an open secret till date. Both Nikhil Upreti and Sanchita Luitel had told that they were married and Nikhil had gone to Mumbai to live with Sanchita. It was only Nikhil’s first wife, Kopila, who refused to accept the truth. Due to the sympathy towards Kopila Upreti and their young kid, people wished that Nikhil was in vacation in Mumbai and will return back soon.

Nikhil decided to close the chapter by writing a letter to a newspaper, Samacharpatra, in Nepal, explaining how and when he married Sanchita Luitel. He also told that he is living with Sanchita in a flat in Mumbai.

It is reported that Nikhil has called Kopila his ‘ex-wife’. But, Nikhil and Kopila are not separated legally yet. Nikhil has accused that Kopila was blackmailing him and she doesn’t love him and she considers him one of her source of income. Nikhil told that Kopila has made his live difficult in Nepal. She made him flee leaving every thing from his properties to his film career.

According to the report, when the reporter contacted Kopila Upreti for her views on the letter, she dismissed any such accusations. She told that she doesn’t believe in letters.

While analyzing the past events, it is clear that Kopila is a tough cookie. Something terrible should have happened to Nikhil that he can’t come back to Kathmandu. Sanchita came and went back but, Nikhil had been refusing to come back to finish his jobs. It shouldn’t have been easy for Nikhil to dump his hard-earned status in Nepali movies.

14 thoughts on “Nikhil says, he is married to Sanchita … again”