Miss Nepal 2018 performed a spoken word poetry in the talent round of the contest. The poetry titled ‘Colors’ was about violence against girl children. After she was crowned Miss Nepal, she has decided to probe into the problem and try helping girls escape such crime.

In a Instagram chat with her followers, Shrinkhala talked about her experience and how such problems can be dealt with. I have created a video report with the main points of her discussion in the following video:

In the video, Shirnkhala has talked about how to deal with eve-teasing problem in the streets in Nepal. Although she didn’t give a solution, she sure has thought about it in detail and gave two different scenarios :

Responding negatively – Could backfire as many of them are expecting such reaction and would be happy to be responded at. She has suggested to create awareness and tell boys to stop such act.

The main focus of Shrinkhala’s talk was sex education in school and home. Little kids are usually unaware and misled by the lack of proper education. Because of hush-hush environment, kids don’t know what are their responsibility and proper behaviour.

She also asked girls to speak up and tell if somebody’s behaviour is not what they like. She remembered her school days. In her grade 8 or 9 there was a male teacher who used to touch her inappropriately. She couldn’t speak up because of the fear of the teacher. She didn’t talk to her parents either because, her problem was tiny for them to worry about. She even considered leaving the school at that time.

Shrinkahla’s spoken word poetry was hailed as a strong and courageous attempt to deal with a sensitive issue. I have translated the English language poem in Nepali for everybody to understand: 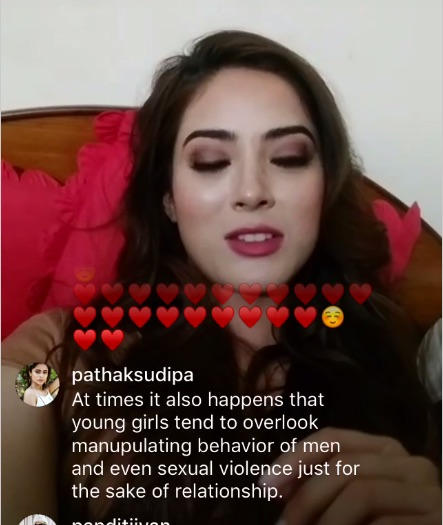 This is the spoken word poetry that I performed for Miss Nepal 2018’s talent round. For me, this piece of writing is really close to my heart. I have tried to express how a child’s innocence is used against her. The consequences of that unfortunate event in her adult life and how she gets over it through self realisation. I’ve used colors to describe her sad memories and how at the end, she realises that those colors made her and that these colors are beautiful. At the end, as she accepts her past and herself, she realises that she is infact a Rainbow!