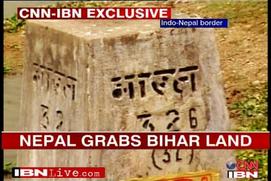 Usually, it is India that grabs Nepali land. Indian nationals used to be heard of taking benefit of the open Nepal-India border to take over land.

But this time, the story is different according to an Indian television news channel. The channel claims that thousands of villagers in seven border districts of Bihar have lost their land and homes to encroachers from Nepal – triggering a significant rise in violence and conflict along the state’s border with the Himalayan Kingdom.

On Thursday, the online news of CNN-IBN, a prominent Indian news channel, reported :

The land grab, it appears, has its genesis in a warped century old border treaty. The Indian authorities’ inability to ensure pillars demarcating the border stays intact, making it worse.

According to CNN-IBN news, villager Rashud Ansari, has said, Nepal is occupying the land which should be part of Bihar as all the papers for that land are with India and are from India. The local authorities are well aware about this issue but their hand seems tied down. It further writes, “A lot of people here are leaving their homes and are going to other towns because of the amount of problem Nepal is creating in illegally occupying our land,” said Ramesh Kamgaar, a villager.

The report further said, the 600 Km long open Indo-Nepal border is being patrolled by the Sashatra Seema Bal or SSB, India’s border security force. Yet, pillars demarcating the border are regularly uprooted.

CNN-IBN cited Indian intelligence reports which estimates as below: –

716 International border pillars have disappeared along the Indo-Nepal border.

The report referred the Sugauli treaty signed by the British in 1816, declaring the river Mahakali as the border between the two countries and said the treaty is meaningless as the river has changed course several times southwards into Indian land.

One thought on “Nepal or India, who is grabbing land of other nation?”