There was a rumour going on at the time of monarchy. People used to talk about the relationship between Komal and then prince Dhirendra. Dhirendra had a reputation of a playboy. It was a common belief that any girl in Dhirendra’s radar was not safe. Komal was one of his favourite singers and she was also an athlete. Dhirendra was the chief of Nepal Sports Council. In an interview, Komal Oli had quoted Late Sarad Chandra Shah, one of the right hands of Dhirendra (and also main force behind the notorious ‘Bhumigat Giroha’) telling her about Dhirendra’s affection towards her. Here is a video report about the affair rumour:

In response to the question about her relationship with then prince, Komal has written: 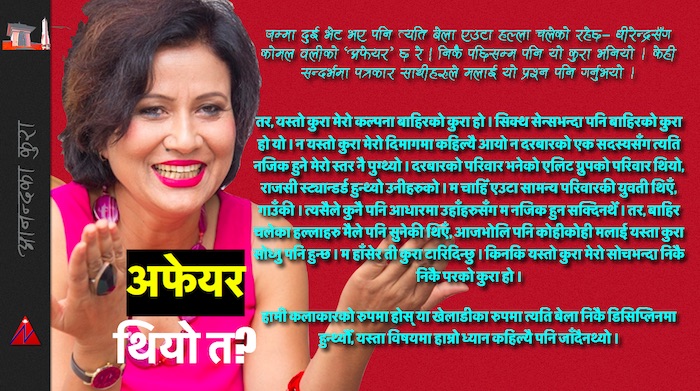 There had been at least a playboy in every generations of monarchy in Nepal. The last monarch, Gyanendra’s son, Paras has been the subject of controversy over his affair with women and crime. He had affair with a Thai woman and had problem with police in Thailand. He is accused of killing a singer and other crimes.

In his father’s generation – prince Dhirendra had the image of playboy. In his grand-father’s generation, Prince Basundhara was such prince. Although they were princes, their lives were not easy. It was not only themselves, every royal members were affected by their actions. They created a bad impression of royalty among the people. There is a belief that Paras was one of the main reasons on the demise of monarchy in Nepal. After the royal massacre, Paras became the crown prince but the people were not willing to accept Paras as their future King. When King Gyanendra realized the public sentiments – in his last days, he tried to skip Paras and handover the crown to Para’s son, Hridayendra. The term ‘Baby King’ was quite popular at that time.

In the previous generation, Prince Dhirendra was involved in various crimes. He was considered the main force behind Bhumigat Giroha – that conducted various crimes. The secret organization that worked against all the anti-royalist and pro-democratic forces before Panchayat system was abolished.

Dhirendra was married to then-queen’s sister Prekshya. But, being in relationship with various women, his relationship with the princess wasn’t cordial. Although he fathered three daughter with Prekshya, he demanded divorce to marry a foreign girl. But, the queen was willing to see her sister’s marriage in trouble. When she couldn’t stop the divorce, she stripped off “Adhirajkumar” title from Dhirendra. Before that, she punished all of his closest aides including his bodyguard Bharat Gurung. They were arrested in charge of gold smuggling. Dhirendra is also accused to supplying drugs to the palace. Drug abuse by prince Dipendra was considered one of the causes of the royal massacre of 2001.

Troubles in Prince Dhirendra’s life started at his birth – his mother Ratan Rajya Laxmi died of the birth complications, and lasted even after his death in 2001. The latest trouble related to Dhirendra is the inability of one of his daughter to get the citizenship document. I am creating video reports on all aspects of Dhirendra’s life. The video attached in the beginning is the second in the series.

This is an on-going series, I am preparing on-the-go. New video will be uploaded every Friday. I knew nothing when I started the series. So, it is learn & report series. Please comment with the information you have so that I can discuss about it in future videos.