The Eva Films production movie ‘Timi Binako Jiwan’ was released on August 10, 2010 in theaters out of Kathmandu. The movie features music of Taraprakash Limbu, fight direction of Roshan Shrestha and the choreography of Govind Rai.

END_OF_DOCUMENT_TOKEN_TO_BE_REPLACED

Two new movies are releasing on Friday, April 25 in theaters all over Nepal. The debut movie of Aryan Sigdel as a co-producer, ‘November Rain’ and comedy movie ‘Kabaddi’ are going to compete with each other. Both movies have good artists with potential. 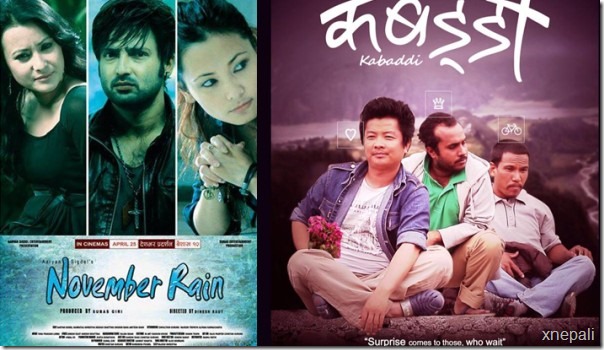 ‘November Rain’ features Namrata Shrestha, Aryan Sigdel, Chhulthim Gurung, Keshav Bhattarai, Hiuwala Gautam etc. The movie directed by Dinesh Raut had received a good publicity since the start. Right after his marriage, Aryan has started the publicity of the movie. Although Namrata Shrestha has been sick and is resting in Pokhara, other artists are teamed up to promote the movie.

END_OF_DOCUMENT_TOKEN_TO_BE_REPLACED

Let me help you – the differences are:

Apart from that, the name is confusing. It’s not only the name, the fonts used are also similar and the color gradient in the name are also same – red to yellow.