Let me help you – the differences are:

Apart from that, the name is confusing. It’s not only the name, the fonts used are also similar and the color gradient in the name are also same – red to yellow.

Rekha claims that she had introduced Biraj Bhatt in the Nepali film industry. She wants to get all the credits of his success but, at the same time, she also copies his movies (at least, the name for now). We suspect, the story might also be similar. If you want, you can watch ‘Himmatwala’ in full below to compare it with Rekha’s upcoming film.

This is not the first time Rekha had copied posters of her movies from Bollywood. The poster of ‘Hifajat‘ was also a Photoshop copy of a Hollywood movie – ‘Resident Evil Extinction’.

Well, this copy is slightly better than the previous copy-paste: 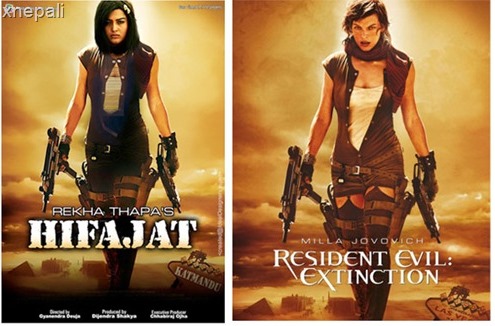 One thought on “Find the difference – Himmatwala and Himmatwali, Rekha Thapa did that again”