END_OF_DOCUMENT_TOKEN_TO_BE_REPLACED

Actress Priyanka Karki had purchased and proudly showed-off, a vehicle, by her own showbiz income. Buying a vehicle by one’s own income is a huge feat in itself in the Nepali film industry. There is no doubt that Priyanka has earned it as she had been very busy and has been a well known actress who has acted in movies, participated in various stage shows in and out of the country, and done various modeling assignments.

But, gossip columns in some online media have fabricated a news accusing Priyanka of using earthquake victim funds to purchase the vehicle. Such accusations however are not based on any facts or proofs. Nobody actually believed such rumor until Priyanka wrote a long message in her Facebook profile to tell that she was hurt by the comment. 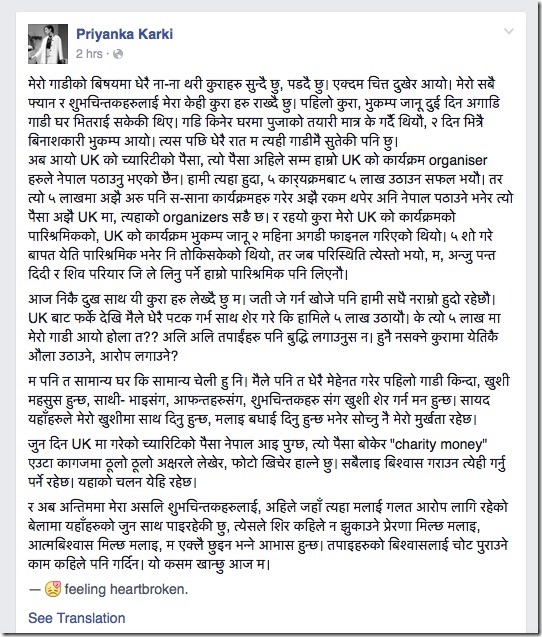 In the message (attached) Priyanka Karki has given all the details of her fund collection effort and the amount of the collected fund. She has told that the fund collected in the UK is yet to arrive in Nepal and she has promised to show it to everybody.