After Miss Nepal 1995 Sumi Khadka, Miss Nepal World 1997 Jharana Bajracharya and Miss Nepal 2002 Malvika Subba, now it is the turn of another ex-Miss Nepal to become a mother. Miss Nepal 2009, Zenisha Moktan, who got married last year (read Zenisha’s marriage report), is going to give birth to a child soon. Moktan with a clearly visible baby bump is in a vacation in preparation for the child birth.

The expectant mother and father had organized a party to announce the pregnancy a while ago. Here is a short video report of the event.

The couple had also announced if it is a boy or a girl in the event. To create the suspense they played a game. To-be father held two balloons with blue coloured confetti in one and pink coloured confetti in another. To-be mother had held two plates with pink and blue confetti in them. While Dikesh Malhotra created a tension by taking time in squishing one of the balloons, Zenisha waited excitedly to throw the confetti from one of the plates.

Blue is considered the colour of a by and pink is for the girl.

Now, can you guess is Zenisha giving birth to a girl or a boy? Watch the video above to confirm your guess. Please comment. 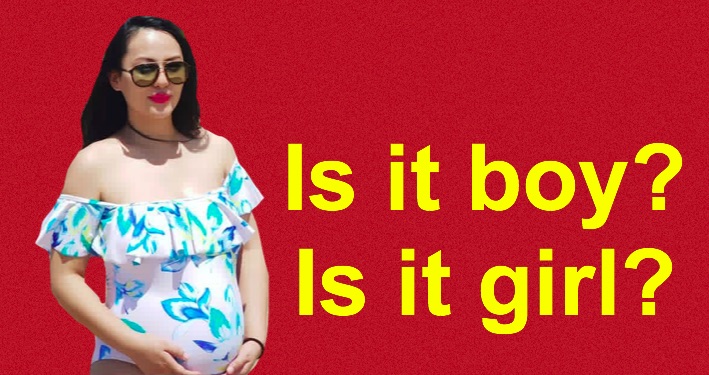 Before becoming Miss Nepal in 2009, Zenisha had acted in comedy serial ‘Gharbei Ba’. Zenisha was even nominated for the best comedy actress award. But, other comedy actors had however protested the award and ‘Meri Bassai’ team had boycotted it.

Zenisha had to do some dental job to improve her smile before going to participate in Miss World 2009.

Although she didn’t win any titles, she did represented the country well.

My best wishes to Zenisha and Dikesh for the childbirth and parenthood.