This week two more Nepali movies are being released in theaters. Two different movies ‘Manjari’ and ‘Vigilante’ are going to release on March 22, 2013. Both of the movies are considered to be the movies of interest for the audience. 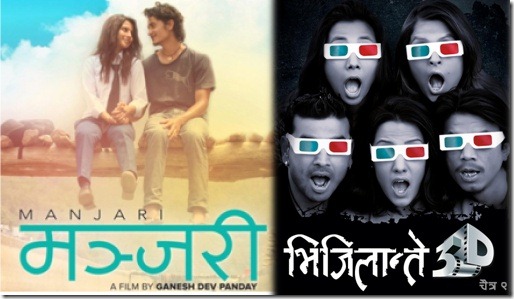 The movie made on a love story of two teenagers, ‘Manjari’ is appreciated for it’s melodious music and the movie is also expected to be liked by the audience. The movie introduces Gaurav Pahari and Sujata Koirala in the lead role and is made on a real story that happened in Butwal area. The movie features Tika Pahadi, Bishnu Rijal, Sarita Bhandari and Kopila Thapa in main roles. The movie made under Tuka International banner is produced jointly by Naresh Dev Pandey, Mahesh Chalise and Pradeep Kumar Uday. The movie features cinematography of Mahesh Poudel, choreography of Ghambir Bista, editing of Ananta Thapaliya and music of Kaliprasad Baskota.

The first Nepali movie made on 3D technology ‘Vigilante’ is also going to release in theaters on this Friday. The movie produced and directed by Dipendra K. Khanal features the script of Shan Basnet. The movie features actress Priyanka Karki, Subash Thapa, Raj Ghimire, Sikha Shahi (Dipsikha Shahi), Menuka Pradhan and others in main roles. ‘Vigilante’ is produced under Aslesha Entertainment and is edited by Dirgha Khadka. The cinematographer of the movie is Purushotam Pradhan, action by Surya Thokar and the music of Suresh Rai.

CORRECTION – We had mistakenly posted the release date of the movies as March 1. The date was supposed to be March 22 (now corrected).