The director of upcoming movie ‘Kohinoor’, Aakash Adhikari cried during a press meet to talk about the movie. He couldn’t control himself when he remembered the producer and the lead actor of the movie Shree Krishna Shrestha, who fell sick in his honeymoon.

Watch the following video to see the reaction of the director when he remembered Shree:

Many have suspected that Shree Krishna might be in serious condition based on the reaction of Aakash. But, he has also told that Shree will be back for the promotion of the movie in a week. 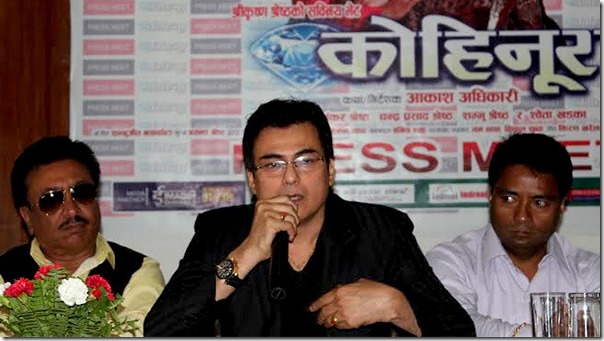 Shree Krishna’s wife and the lead actress of ‘Kohinoor’ Sweta Khadka is with the actor to take care of him. Last week, Sweta had confirmed the sickness in a Facebook post. In a rumor report, Shree’s family members are also not aware where he is being treated. It is reported that the actor is being treated in Thailand or in Delhi.

‘Kohinoor’ is scheduled to release on August 8.

Sweta and Shree Krishna got married on July 7. They had been having affair since Sweta debuted in Shree Krishna’s movie ‘Kaha Bhetiyala’ although they kept on denying the affair.