Being a multi-starrer, the movie was highly awaited. But, the wait resulted in higher expectation – more than what the film had to offer. So the most awaited, gangster/crime themed movie wasn’t successful in the box office. The movie tells the story of the underground mafia operating in Kathmandu. Because of violence and vulgar dialogues, the movie was given an ‘A’ certificate. The grading is given to films only suitable for the audience aged 16 years or older.

I wrote about the movie previously – ‘Mukhauta’ was released on June 13, 2014. The reason movie didn’t get the viewers as expected was attributed to various factors. The world cup football game was running at the time of the release – so, the film makers had also blamed the game for the failure of the movie. ‘Mukhauta’ producer Rabin Shrestha had recently announced the start of the production of the sequel of the movie titled ‘Mukhauta 2’. I had appreciated the participation of Harshika Shrestha in the premier of the movie in spite of her broken leg. The affair between Nisha Adhikari and cricketer Sharad Veshwakar became more apparent when they were seen together at the premier of the movie. This is the debut movie of the director Arpan Thapa as an actor.

Watch the movie in a single part:

Watch the audio launch video – and vulgar dialogue in the movie: 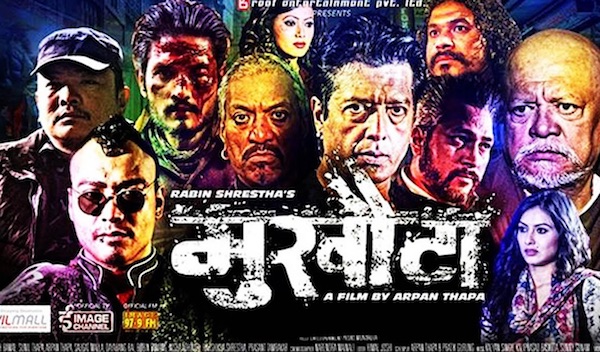 Please comment what do you think of the movie.