The release date of the movie directed by Subrat Acharya, ‘Adhakatti’ has been announced by the producer Pradeep K Uday. The movie will release on October 23 (Kartik 6) in Kathmandu and on October 20 (Kartik 3) in theaters out of Kathmandu. Various charity shows of the movie were held in Nepal and out of country recently. The item song of the movie ‘Timro Figure Coke Cola” had been quite popular among the public. 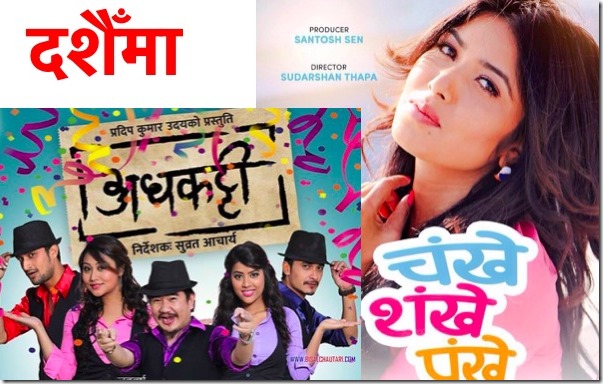 ‘Adhakatti’ is a comedy movie featuring Ashishma Nakarmi, Rista Basnet, Gaurav Pahadi, Gajit Bista, Wilson Bikram Rai and Pradeep Bastola in main roles. Actress Namrata Shrestha is also featured in a special role in the movie. ‘Adhakatti’ was previously scheduled to release on May 22, on the birthday of Pradeep K Uday.

Earlier, ‘Chanke Shankhe Pankhe’ had announced the release of the movie in Dashain (on October 20). The director Sudarshan Thapa movie, previously scheduled to release on May 15, had been rescheduled because of the earthquake. The movie was premiered in Bahrain a week before the earthquake. The movie features Subash Thapa, Sudarshan Thapa, Pooja Sharma, and Nandita KC in leading roles.  (click here for the music jukebox of ‘Chankhe Shankhe Pankhe’.)

The viewers will have hard time in choosing which movie to watch as both the movies are made in comedy themes.