Nepal Film Development Company (NFDC) started the National Film Award last year and it has started nominating the best artists every 4 months. The final nomination will be compiled from these nominations. The current nomination is based on the movies released in the last four months (Bhadra 1 to Mangsir end) in theaters. 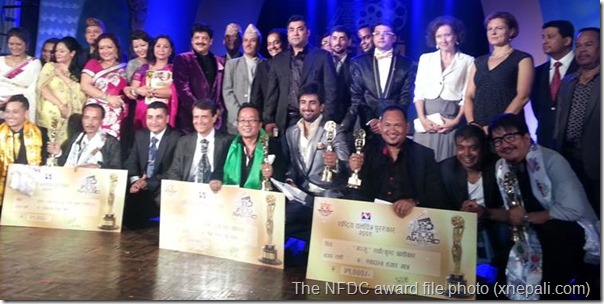 In the last four months 29 movies were released. The top five movies nominated for the award are:

In Best actor category the nominations are:

In the best actress category, the nominations are:

In new actors category four actors are nominated. The nominated actors include Anmol KC from ‘Hostel’, Anup Bikram Shahi from ‘Sourya’, Kishor Shrestha from ‘Urbashi’ and Salon Basnet from ‘Hostel’.

In action direction the nomination are : Dev Maharjan (Dhuwani), Himal KC (in War, Bouncer and Gambler), and Roshan Shrestha (Kali). In addition to these nominations, the nominations of music composition, editing, sound engineering, playback singing, background score, and choreography categories. The award is awarded in 20 different categories.