A heart touching movie – social drama by Raj Bahadur Sane. Sane is known for producing action movies. The viewers have liked the acting of the little actor and the story of the film.

The movie is a presentation of Greenhill VFX Media by Deeness Shrestha is an unique movie featuring the superstar of Nepali film industry, Rajesh Hamal, in a woman’s role. The script of the movie is written by the director and the cinematographer Deeness Shrestha. The editors of the movie are Shahil Khan and Milan Shrestha. The music is composed by Arjun Pokhrel and the background score is prepared by Alish Karki. The songs are written by Krishna Hari Baral and Dayaram Pandey, choreography by My Call. Action is directed by Asta Maharjan. The movie is given a P/G ranking by the censor board of Nepal.

Two new movies ‘Seto Surya’ and ‘Parcel’ were released on Friday, December 9, 2016. ‘Seto Sury’ is a movie by director Deepak Rauniyar and ‘Parcel’ is directed by Rabin Shrestha.

Two new movies ‘Gaatho’ and ‘Driver Dai’ have released in theatre today, on September 16, 2016. Although, the targeted audience of ‘Driver Dai’ is different from ‘Gaatho’ there is an issue that can affect the business of these movies. The movie released last week, ‘Chhaka Panja’ is still going on strong in all the theatres. These movies will certainly be affected by the popularity of the last week’s release. 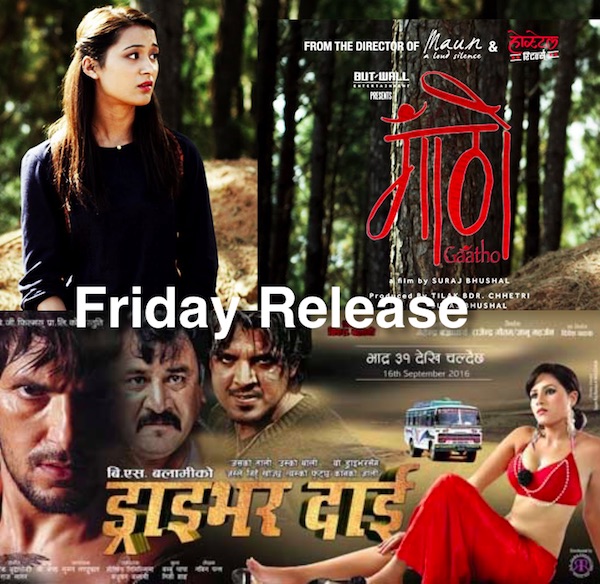 END_OF_DOCUMENT_TOKEN_TO_BE_REPLACED

Three new movies have released in theatres in Nepal today on Friday, September 2, 2016. It is interesting that the lead actress of the two movies ‘Laljodi’ and ‘Bracelet’ is Rajani KC. The lead actress of ‘Brindaban’ is Shilpa Pokharel. 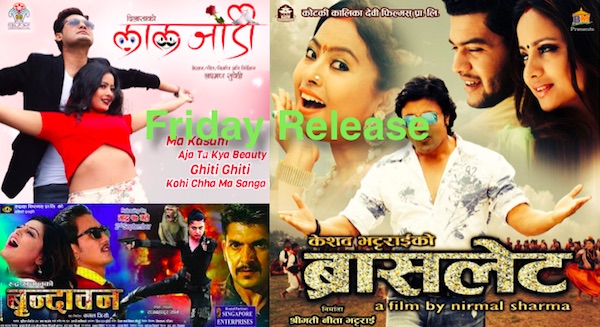 These movies are seeking the viewers’ attention at the time of Teej holidays.

END_OF_DOCUMENT_TOKEN_TO_BE_REPLACED

The movie featuring the superstar of Nepali movie industry, Rajesh Hamal in a female’s role, ‘Shakuntal’ was released in theater this Friday on August 26, 2016. The movie was one of the most awaited movie of the year because of Rajesh Hamal’s a woman’s get-up. Although Hamal is featured in a female’s role, he is still featured in action role like his previous movies. 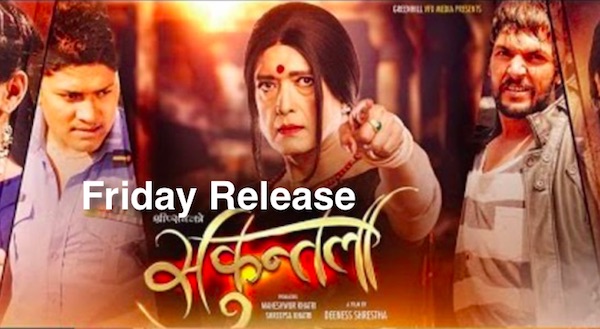 The movie shows Rajesh Hamal in action role while wearing Saree. At the time when most of the movie are not successful commercially, ’Shakuntala’ is expected to do better. The actor Rajesh Hamal howver is not in Nepal at the time of the release of the movie. He is currently in the USA. In addition to Rajesh Hamal, the movie also features Kishor Khatiwada, Anu Shah and Pradeep Dhakal. Model and actress Namrata Sapkota is featured in an item dance. The movie is directed by Dinesh Shrestha.
END_OF_DOCUMENT_TOKEN_TO_BE_REPLACED

Watch the full movie ‘Lanka’ in a single part:

END_OF_DOCUMENT_TOKEN_TO_BE_REPLACED

Rekha’s movie ‘Rampyari’ is inaugurated on the auspicious occasion of Bishowkarma Puja. According to Hindu belief, Bishowkarma is the god of tools. On every Shrawan 1st god Bishowkarma is worshiped and the tools like vehicle, computer, camera etc. are worshiped for them to work properly. Rekha has chosen the day to start the shooting of her movie. Rekha’s statement on the start of the shooting: 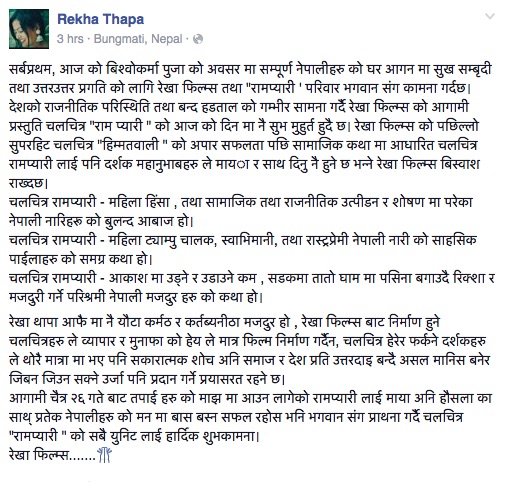 Why not Kishor Khatiwada?

Rekha Thapa has chosen actor Sabin Shrestha to be featured opposite to her in her upcoming movie ‘Rampyari’. Although she took a long time to choose the actor in the role, the relationship between the two is still good. Rekha is known to drift away from the actor who debut in her movies. Rekha Thapa had introduced in Sabin Shrestha in ‘Andaaz’ (watch ‘Andaaz’ here) in 2011. 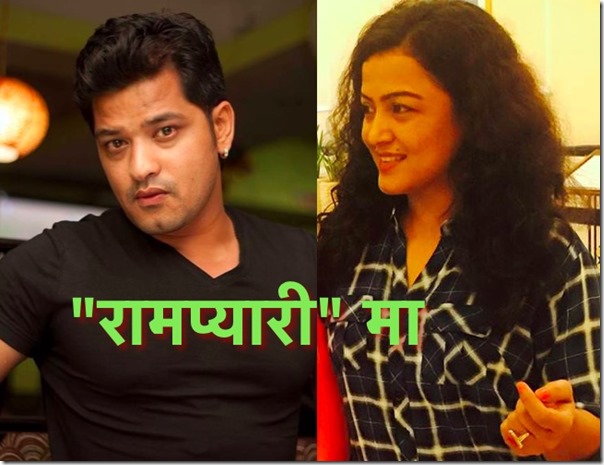 Rekha’s nephew Avash Adhikari was chosen for a main role in March and his opposite in the movie is going to be Ashma DC according to a report published on the first week of September. After signing the agreement with Sabin, the movie is going to floor on Ashoj 1 (September 18). After a lengthy stay in the USA, Rekha had returned back to Nepal on July 27 to start the shooting of the movie.

When we look at the history of the actors Rekha had introduced in her banner, Rekha Films, most of the actors don’t even talk to her these days. We are discussing the adverse relationship of Rekha with actors:

END_OF_DOCUMENT_TOKEN_TO_BE_REPLACED END_OF_DOCUMENT_TOKEN_TO_BE_REPLACED

The Censor Board has certified that the Chhabi Raj Ojha production movie ‘Hawaldar Suntali’ is suitable for the viewers of all age by awarding an ‘U’ rating. The movie to release on April 3 is made under Chhabiraj Films banner. The movie made on a real story of the rape of a police officer Suntali Dhami by her own colleagues, features Shilpa Pokharel in the role of Suntali. Directed by Rishi Lamichane, the movie features Sabin Shrestha and Kishor Khatiwada with Shilpa in leading roles.

END_OF_DOCUMENT_TOKEN_TO_BE_REPLACED

Nepali film ‘Tathastu’ is about Basanti who is abused by her husband. The film about domestic violence and marital rape is a story of a typical Nepali woman abused by her husband. Basanti’s husband, Kamal, is an influential political figure. Kamal sexually abuses Basanti before marriage and it continues after the marriage. When things become intolerable, Basanti fakes death and runs away to her village.

When Kamal knew that Basanti is alive, he brings her back. The movie ‘Tathastu’ is about the fight of Bananti against her abusing husband. 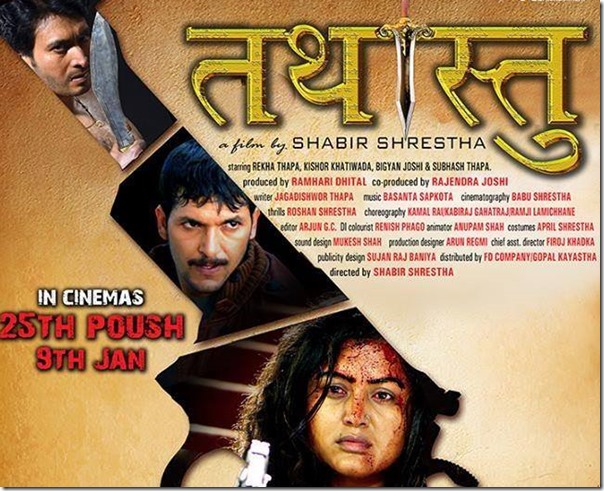 END_OF_DOCUMENT_TOKEN_TO_BE_REPLACED

After the huge success of ‘Chha Ekan Chha‘, comedy artists Deepak Raj Giri, Deepa Shree Niraula and Nirmal Sharma have started the production of their new movie ‘Wada Number 6’. The shooting of ‘Wada Number 6’, being directed by Ujjwal Ghimire, has started in Chhapagain Studio in Kathmandu. Although being of similar name and similar artists, the movie is not a sequel of ‘Chha Ekan Chha’. Actress Priyanka Karki has replaced ‘Chha Ekan Chha’ actress Neeta Dhungana and Ujjwal has replaced Dinesh DC. In actors, Sandeep Chhetri is also being replaced by Dayahang Rai. Other actors in the movie include Jitu Nepal, Deepak Raj Giri, Sitaram Kattel, Kedar ghimire, Kishor Khatiwada, and Shiva Hari Poudel.

END_OF_DOCUMENT_TOKEN_TO_BE_REPLACED

‘Luck’ is written by the director Rishi Neupane himself. The movie was criticized for the double meaning item dance ‘Dekhai dinchhu sabai kura paisa tire pachhi …’.