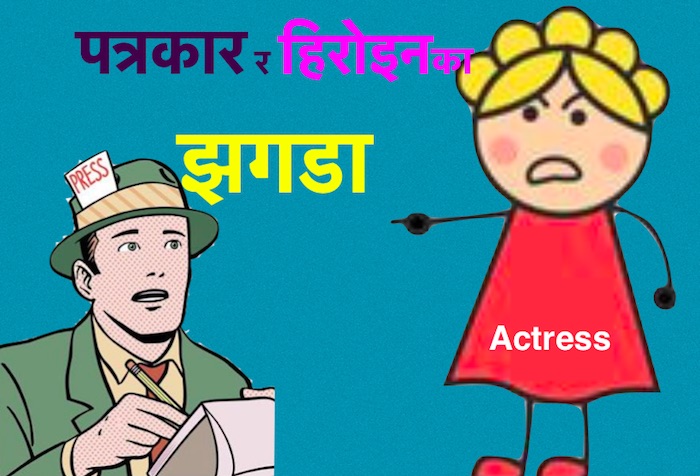 What had happened – Sushmita KC expressed her dissatisfaction about the report about her movie â€˜Ma Ta Timrai Hunâ€™ aired in the 35th episode of a Kantipur TV film program ‘Rajatpat’. In the report aired in the TV show, her debut production movie was a failure and it didnâ€™t do good business. Click here for more details of the controversy.
Where – Facebook
When – August 2016

Sushma Karki and a journalist

What had happened – Sushma Karki was angry and asked journalists to do homework before asking questions.
Where – Kathmandu, during the press meet of ‘Sanjog’
When – July 2016

This incident was similar to Shristi Shrestha’s controversy. I am not sure but, it might have even been inspired by Shristi.

***
The following portion of the post was originally posted on Jun 30, 2016. After the original post, there were a couple of issues involving actresses and journalists. I have updated this post to include the latest incidents.
***
Celebrities and journalists have love-hate relationship. They can’t love each other but, as one needs the other, they can’t hate either. This delicate balance doesn’t always work. That is when controversy starts. Let me discuss the most popular actress-journalist controversies:

Shristi Shrestha and a journalist

What had happened – Shristi Shrestha was angry.
Where – Chitwan, during promotion of ‘Gajalu’
When – June 2016

In the promotion program of her debut movie ‘Gajalu’ in Chitwan, Shristi Shrestha was pissed off by the question of a journalist. Shristi didn’t want to answer the question about her interest in acting. She asked the journalist to do proper homework before asking questions.

The question was – “Are you trying to cash the popularity by becoming a Miss Nepal by acting in movies or are you really interested in acting?” Shristi’s answer was another question, ” Have you done proper research on me?” She told, she didn’t like the way the journalist asked the question.

What had happened – Rekha Thapa slapped Chiranjivi Poudel over an article he wrote.
Where – Kathmandu, at Soury Daily office
When – August, 2012

Actress Rekha Thapa had slapped ‘Sourya’ daily journalist, over a satirical article published in the daily. The journalist Poudel had a cut on his cheek, caused by Rekha. (Details about Rekha Thapa controversy)

What had happened – Nisha was angry when Anup Bhattarai tried to take her photo. Nisha accused him of trying to take photo of her underwear.
Where – Kathmandu, ‘Loot’ movie 51 days celebration
When – June 2016

Using a point-and-shoot camera, Anup was trying to take a photo of Nisha Adhikari. Nisha grabbed the camera from his hand. Sahana Bajracharya also supported Nisha Adhikari. Later in the program, Nisha told that it was her mistake to man-handle the journalist.

video of the incident:

What had happened – Sumina Ghimire called Bijaya Aawaj and scolded him. He taped the call and released online.
Where – Kathmandu
When – 2069 BS

Actress Sumina Ghimire wasn’t happy by the news article written by Bijaya Aawaj. She called him and threatened to kill him. The journalist association had intervened and Sumina had realized her mistake. (Report on Sumina Ghimire’s controversy she was forced to write an apology letter.)

Sumina’s response to the controversy (video):

What had happened – Priyanka Karki accuses journalists of photo manipulation.
Where – Nai Nabhannu La 2
When – July, 2014

What had happened – Shilpa Pokharel was pissed off by engagement rumor.
Where –
When – 2016

In response to Shilpa Pokharel’s engagement gossip, the actress had threatened Rasaili of legal action. Although Shilpa didn’t take any action, the gossip has turned out be a false one. 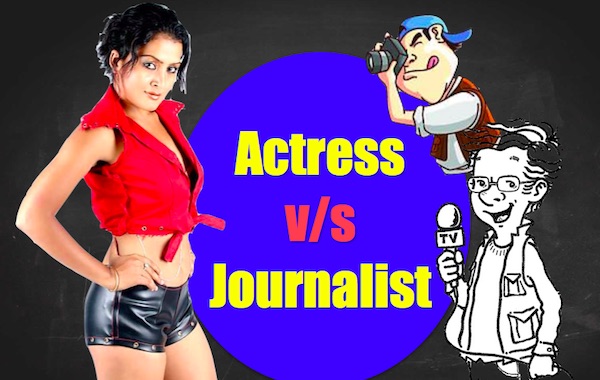