The Nepali movie ‘Tanab’ was released in April of 2015. The movie directed by Rishi Neupane is made on a real incident. The movie produced by Bibek Sapkota, it features action of Samrat Basnet, music of Chetan Sapkota, cinematography of Ganesh Shrestha, choreography of Babbu Thapa. ‘Tanab’ is made under the banner of Superior Films.

END_OF_DOCUMENT_TOKEN_TO_BE_REPLACED

Nepali movie ‘Mission 420’ was released on June 21, 2014 with another movie titled ‘Kasto Tension’. The movie made under Kushal Films is a presentation of Kumar Bista. The movie is a story of struggling youths. The movie features the action of Roshan Shrestha and cinematography of Shyam Rayamajhi.

END_OF_DOCUMENT_TOKEN_TO_BE_REPLACED

Nepali movie ‘Mistake’ is a new movie released earlier this year. Charity shows of the movie were also held in Singapore and Malaysia a while ago for the earthquake victim relief.

‘Mistake is a presentation of RB Movies. The movie features music of Arjun Pokharel, cinematograph by Rahul Rai, editing by Bipin Malla, choreography by Gambhir Bista / Kabiraj Gahatraj, and action by Samrat Basnet. The child artists in the movie are Ritu Acharya and Sankalpa Siwakoti.

END_OF_DOCUMENT_TOKEN_TO_BE_REPLACED

A premier show of upcoming movie ‘Mistake’ is being held in Malaysia and Singapore to help earthquake victims. The shows will be held in two locations in Malaysia and one location in Singapore.

The movie released in November of 2014 had an average performance in theater.

A presentation of RB movies, ‘Mistake’ is a movie produced by Bishnu Atharai and made on the story and direction of Rishi Raj Acharya. The movie veatures Nirmal Century, Harshika Shreshta, Sushant Karki, Shree Raj Acharya, Rama Singh and others. The charity shows are being organized by E4 Entertainment.

END_OF_DOCUMENT_TOKEN_TO_BE_REPLACED

This week only one movie ‘Tanab’ is releasing in theater on April 3, 2015. It is a relief at the time when three or more movies are being released every week. Previously another movie ‘Paap’ was also scheduled to release on the same date. But, the movie is now delayed for a few weeks. 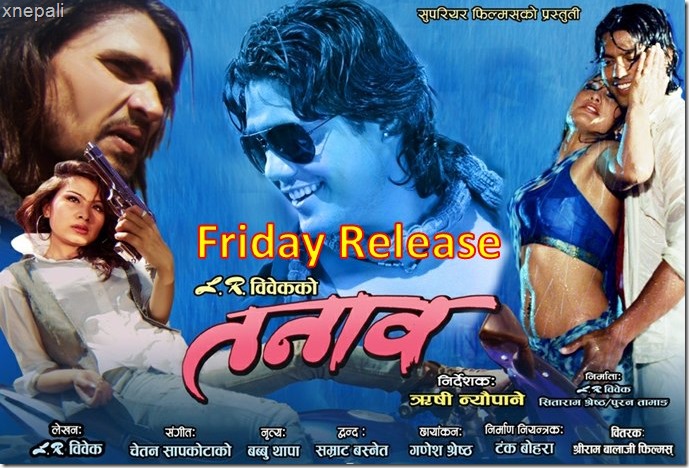 A movie directed by Rishi Neupane, ‘Tanab’ is made on a real incident. The movie features Nirmal Century with actresses Ragini Khadgi and Ani Kunwar. The actor Century is featured as a lover boy and action actor.

END_OF_DOCUMENT_TOKEN_TO_BE_REPLACED

A 2069 BS movie, ‘Barsat’ is the second venture of Mata Manakamana Production. Krishna Shrestha did the cinematography, Shankar BC in choreography, Roshan Shrestha in action, Shivam Adhikari in script and dialogue.