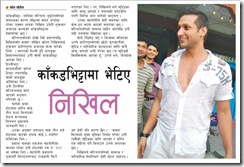 It is no doubt, Nikhil Upreti is a good actor. But, with the latest issue of marriage with Sanchita Luitel and aggressive response of his legal wife Kopila Upreti, Nikhil is making news every now and then.

Lately, Nikhil has made news when he showed up in Nepal after his extensive stay in Mumbai. Kantipur published a photo with, a bit more than required, details of his appearance in today’s paper. Attached is the clipping of full news.

In the news, Nikhil was told to be on his way to Kathmandu and he told that he was back to finish his pending shootings of the movie Kassam.

Background context: It seems, I was also giving a whole lot of (unnecessary?) attention to Nikhil’s affair. Nikhil claimed to have married Sanchita Luitel before flying to Mumbai. His wife Kopila, told the news was fake. There were also reports of delays in movies due to absence of Nikhil and Sanchita. The film crew of ‘Masti’ met him in Mumbai to do the dubbing of some damaged reels of the movie there. There was also a report in which Rajesh Hamal was told to replace Nikhil in his role in an upcoming movie ‘Mato’. Sanchita came to Nepal to finish the dubbing  of Kohi Mero and she also confirmed that she has married Nikhil but Kopila still refuses to accept her claims. The producers of movie, Kassam, were in trouble when Biraj Bhatt refused to accept 5 lakhs to finish Nikhil’s role. Then Samacharpatra reported that Nikhil wrote an email to them inside story of his marriage with Sanchita.

2 thoughts on “Is Nikhil Upreti getting a bit too much attention?”