The list of Top 10 movies published in Saptahik weekly sound like a joke. Out of 85 movies released in the year 2073, there weren’t enough hit movies to fill the list. The weekly has dumped movie names despite the failure of the movies to win the hearts of the viewers. According to the report only six movies had made profit in the year. Four more movies could do a breakeven business.

After reviewing the list, I think the list could have been titled ‘Top 5 Movies of the year’. When there aren’t enough movies, they shouldn’t have created the list and fill it with unsuccessful movies. Let me review each movies in the list.

The first in the list ‘Chhakka Panja’ is a truly successful movie of the year. It did make record breaking business. So, first position of the movie makes sense. You can watch ‘Chhakka Panja’ here.

The second in the list is ‘Loot 2’. The sequel of the previous superhit movie ‘Loot’ also did a good business although many found it less fulfilling than the original movies. After ‘Chhakka Panja’, ‘Loot 2’ was made good impression to the viewers. (Watch the original ‘Loot’ here)
END_OF_DOCUMENT_TOKEN_TO_BE_REPLACED

The producer and director of ‘Chhaka Panja’, Deepak Raj Giri and Deepa Shree Niraula have asked the police to investigate against themselves in a request letter submitted to the police. After returning from their Europe tour Deepak and Deepa had visited the police station to ask them to investigate the case of a suicide that was told to be caused after they threatened the victim.

A video about their visit to police (credit Onlinekhabar)

After the piracy of the hit movie ‘Chhaka Panja’ the police had arrested 4 guys. The accused had shared the video of the movie with their friends. When the police found that they had only shared the video for entertainment and not for money, they released the guys.
END_OF_DOCUMENT_TOKEN_TO_BE_REPLACED

After being accused and arrested by the police, one of the four suspects, Krishna Subedi, was released on bail. But, he later committed suicide accusing it being a murder. In social network, Deepak Raj Giri was accused of being the cause of death. In response, Deepak Raj Giri, has asked the police to do an investigation and find the truth and has asked everybody to believe that he is innocent. A video report on what Deepak had to say:

END_OF_DOCUMENT_TOKEN_TO_BE_REPLACED

One of the guy involved in the piracy of ‘Chhaka Panja’ has committed suicide at his home. According to reports, the guy named Krishna Subedi from Nawalparasi, Kawasoti was found dead at his room in Gaushala. 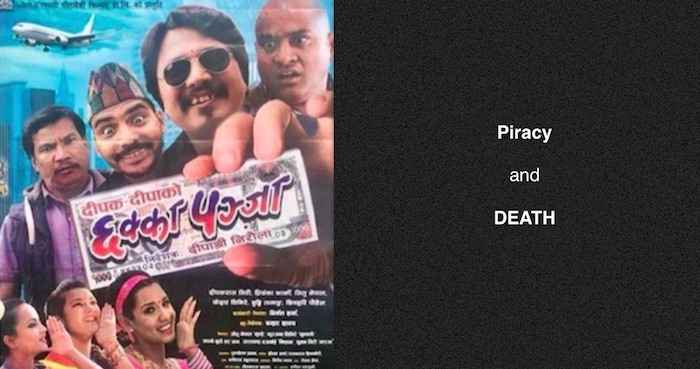 Subedi had reportedly transferred the movie to Australia through Google Drive. Earlier, Deepak Raj Giri had told that the police had arrested some people in connection with the piracy of the movie. He had also announced the release of the movie in YouTube.

Why did Krishna Subedi committed suicide?

There is no report on why Krishna Subedi killed himself. But, as he was arrested and was released in bail, he might have gone through an enrmous amount of stress. It seems, he was only involved in transferring a file he received from somebody else. He doesn’t seem to be directly involved in stealing the movie from the producers.
END_OF_DOCUMENT_TOKEN_TO_BE_REPLACED

One of the most successful movies in the history of Nepali movie industry, ‘Chhakka Panja’ is the hat trick of super hit movies by the team of Deepak Raj Giri, Deepa Shree Niraula and Nirmal Sharma. The movie prior to this movie, both starting with ‘Chha’, ‘Chha Ekan Chha’ and ‘Woda Number Chha’ both were comedy movies and were successful. The movie was released online through the official channel.

The movie is the directorial debut of comedy actress Deepa Shree Niraula and one of the most successful movies directed by a female director.
END_OF_DOCUMENT_TOKEN_TO_BE_REPLACED

The comedy actor, RP Bhattarai, popularly known as Lajalam after his character in ‘Tito Satya’, had died on December 9, 2016. On the 12th day of his death, Nepali artists gathered at Pragya Bhawan to pay tribute to him. At the program, various artists talked about Bhattarai and remembered the time they had spent with him. A video report on what the participants told about Lajalam:

During the event, Deepa Shree Niraula cried and remembered how she used to scold RP Bhattarai. She wished she hadn’t scolded him that much. She remembered how helpful he used to be and how she suggested him not to eat much.

Ma of MaHa comedy duo, Madan Krishna Shrestha, also expressed his sadness on the untimely demise of one of the popular comedy actors. RP’s friend Narad Khatiwada also remembered the fun time he used to have with Lajalam. He also told some jokes but it was not a funny event to laugh at jokes.
END_OF_DOCUMENT_TOKEN_TO_BE_REPLACED

The movie ‘Chhakka Panja’ has celebrated 100 days in the theatre on December 17, 2016. But, the pre-planned celebration by the film team was delayed because of the untimely demise of one of the actors in the movie. One of the popular comedian, popularly known as Ladalam after his character in ‘Tito Satya’, RP Bhattarai had died on December 9.

The hit movies by the team are also available to watch here:

How was ‘Chhakka Panja’ 100 days in theatre celebrated?

On December 17 the film team went to Pashupati temple to thank the god for the success of the movie. As the celebration party was delayed because of Ladalam’s death, they went to the theatres to meet the viewers. It was mostly a silent celebration.
END_OF_DOCUMENT_TOKEN_TO_BE_REPLACED

One of the few actresses who has been lucky to be featured in three hit movies in the start of her acting career, Barsha Raut, has turned 23 on December 14, 2016. To celebrate her birthday, Barsha went to one of the theatres in Kathmandu and celebrated with the viewers of her movie ‘Jatra’. The movie marks the hat trick in giving hit movies right after entering the Nepali movie industry. Barsha’s earlier two movies ‘Nai Nabhannu La 4’ and ‘Chhakka Panja’ both were successful commercially.

During the birthday celebration, Barsha’s boyfriend, Sanjog Koirala, was also present. Both Sanjog and Barsha talked about their love affair and their ups and lows in knowing each other for the last five years. Sanjog Koirala is also an actor.
END_OF_DOCUMENT_TOKEN_TO_BE_REPLACED

The movie is being screened in association with the local distributor of the movie. A Nepali company Concept Vision Film Production and Distributors had started the distribution of Nepali movies in UAE in October 14, 2016. The first Nepali movie released in UAE was ‘Bir Bikram’.

The Nepali movies in UAE are targeted to the foreign worker Nepali people living in the UAE. In addition to UAE, Nepali movies are expected to be released in other Arab countries including Qatar, Bahrain and Oman. Process of releasing Nepali movies in Thailand has also started.

Watch a video report of 51-days celebration of ‘Chhakka Panja’:

The sole Nepali movie to release today, on September 9, 2016, is ‘Chhaka Panja’. The movie directed by Deepa Shree Niraula also marks the debut of the comedy actress as a director. The movie made on the problem youths face while going for foreign employment is expected to follow the trend of the previous movies of the same team – ‘Woda Number 6’ and ‘Chha Ekan Chha’. Both of these hit movies of the past are available to watch here: