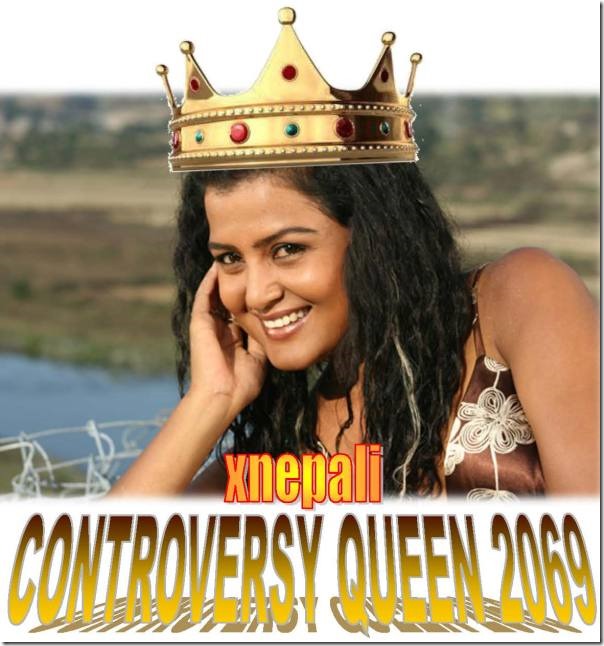 After Rekha, the runner-up of the Controversy Queen 2069 is Sumina Ghimire. She jumped into the next-to-the-top position in the last days of the year when she let her anger rule in a telephone conversation with a journalist. None other than Sushma Karki took the second runner-up title with numerous controversies involving directors and boy friends.

Let’s only talk about the winner, Rekha Thapa:

The year started with the divorce rumor and confirmation by both Rekha and Chhabi Raj although no legal confirmation was publicized. When Chhabi registered Chhabi Raj Films, the divorce was considered confirmed. After being single, Rekha discussed the possibility of her career in politics with an astrologer. Her attempt to get herself appointed as the head of Film Development Board might have been according to the suggestion of the astrologer. But, when the political lobbying didn’t work, she went to USA in a month-long tour.

In the US her controversial decision to cancel her Malaysia visit was also highly criticized. After her return, her statement about homeless Nepali in the US was also criticized by the NRN living in the USA.

Rekha’s relationship with the FDB head ‘Pappu’ and smoking marijuana and getting appointed the advisor of FDB were also the talks of the film industry. Rekha meeting Khum Bahadur Khadka in jail was also considered one of the worst moves of the actress. As an actress Rekha’s ‘Malatiko Bhatti’ was successful.

Gossips posts of Rekha Thapa in 2069 in xnepali

Movies of Rekha Thapa we posted this year: