I wrote about film related websites in Nepal in August of 2010. The websites reviewed at that time are still in operation. Some have improved in their quality and others have remained the same. 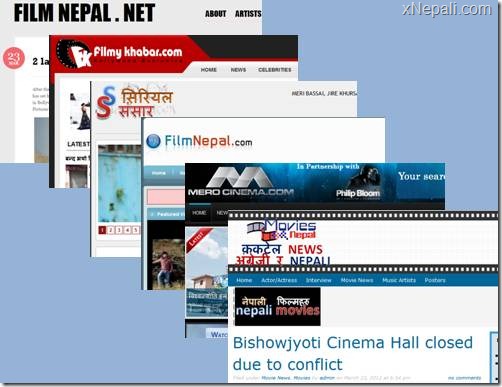 The sites I reviewed were:

END_OF_DOCUMENT_TOKEN_TO_BE_REPLACED

Manoj Pandit wrote a review of Richa Ghimire‘s movie Brakefail. He wrote – "Richa didn’t look like an heroine in the movie," and published it in a website. Richa got angry, and complained to the police, who arrested Manoj. He admitted his "mistake" in getting personal about the actress. Nagarik published the issue and it was made public. 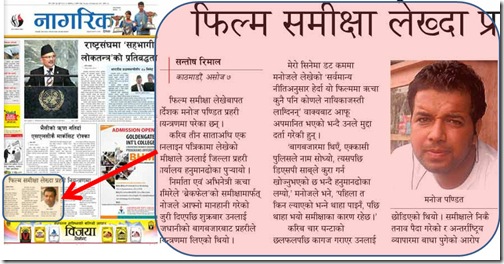 In the article, Richa claimed that the website, Merocinema, wrote the negative review because of the fact that she refused to provide an advertisement to it.  She also told, only NJA designated journalists should write movie reviews – all others should only write positive things.

END_OF_DOCUMENT_TOKEN_TO_BE_REPLACED

The result of the online voting for Merocinema Popular Award 2010 is announced today. Dasdhunga has become the  most popular movie of the year.

The most successful movie has become Bato Muni Ko Phool with 6 awards in different categories. Other winners are:

END_OF_DOCUMENT_TOKEN_TO_BE_REPLACED

A new experiment in Nepali movie industry, a website, merocinema had announced an online award on December 3rd, 2010. After the nomination round, the public voting is going on for the selection of the winners. The final winner will be announced in January.

The nomination for the best movie are:

The first film related magazine in Nepal was â€˜Kamana‘ but they never made a good enough website to talk about. The group that publishes Kamana is not that interested in website and they are pretty happy with the printed publication. The screenshot on the right speaks volumes on its online presence.

As far as I know, the first dedicated film related website was filmnepal.com. The site is still there but it doesn’t get updated that frequently. The site is full of age-old stories that no one is interested in.