The movie features late Jeshika Khadka (Jyoti Khadka) who had committed suicide after the completion of the shooting of the movie. The actress’ relationship with Baldip Rai was also one of the issues that was discussed at that time. But, the real reason of the tragedy is considered to be the sex scandal of the actress with popular comedy singer, Prakash Ojha. After the scandal the actress had been a subject of humiliation. It not only caused problem with the actress, the singer’s career also went into ruins. Prakash Ojha’s comeback attempts as singer, film director and TV program producer had been unsuccessful after that. 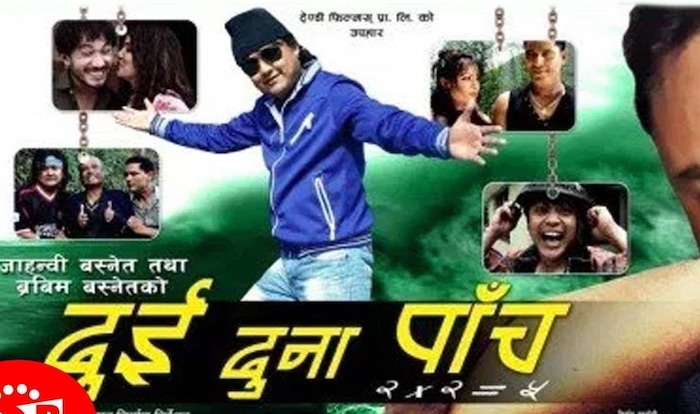 The director and the actor of the movie, Jaya Kishan Basnet, is a brother of another well known director Shovit Basnet. Shovit is credited in establishing Jaya Kishan in the film industry. In addition to acting, Basnet also produces the movies he is featured in. These days, these two have slowed down in the production of movies.

This movie was a presentation of Jahanwi Basnet and Brabhim Basnet present for Trendy Films Pvt. Ltd, the home production of Jaya Kishan Basnet.

The Nepali movie ‘Tori Lahure’ is a presenation of Haridham Dilip Films by Dil Kumar Tamang. The movie features the choreography of Ghambir Bista, action of Shankar Maharjan, music of Santosh Raaj and Ganesh Chaudhary, editing of Surendra Poudel, cinematography of Niraj Kandel, script of Krishna Acharya. The movie also marks the debut of the well known fight-director NB Maharjan as a full director of a feature movie.

END_OF_DOCUMENT_TOKEN_TO_BE_REPLACED

The movie ‘Papi Manche’ is produced by Raj Kumar Rai for RC Pictures and is made on the story and script of Ugesh Rayamajhi. After the huge success of this film, a sequel ‘Papi Manche 2’ was also produced (watch ‘Papi Manche 2’ here) with Nikhil and Poojana Pradhan. Rajesh Hamal is featured in special appearance. Narayan Puri and NB Maharjan are guest artists. A Nepal Police dog named Hero and a monkey named Shyamu from Mumbai are also the leading characters in the film.

END_OF_DOCUMENT_TOKEN_TO_BE_REPLACED

The Nepali film ‘Aawara’ is a presentation of Taiyab Shah of Jewa Films featuring a lot of well known actors. The movie features the choreography of Kamal Rai, action of NB Maharjan, dialogue of Kamal Mainali, script / story of Prakash Thapa, editing of Mukhtar Ahmed, cinematography of Ishwor Shrestha, and music of Sambhujit Baskota.

END_OF_DOCUMENT_TOKEN_TO_BE_REPLACED

Changing names is a common practice among Nepali artists for a better name or for good luck. Some astrologers suggest a different names for the success in their career. For example, Bhuwan KC changed his name to a 7-lettered Bhuwann before the release of his movie ‘Sathi Ma Timro‘. It’s a different story, the movie didn’t do well in theater. Actress Binita Baral had also changed her name to Beenita (7-letters) on the suggestion of an astrologer. The result of the change in names were not that exciting. But, that won’t deter people from changing names. Others change to a better sounding names like Shova to Nandita, Radheshyam to Ramit, Nawaraj to Nawal and so on.

A video slideshow of change in names of Nepali actresses:

A photo slideshow of the actors who have changed their names:

END_OF_DOCUMENT_TOKEN_TO_BE_REPLACED

Nepali actress Sushma Karki is going to be featured in an upcoming movie named ‘Sakas’ with another hot actress Mahima Silwal. Wilson Bikram Rai will be supporting the actresses in the movie.