The movie has been released in YouTube after 8 months of release in theatre. The love story film introduced Jassita Gurung in leading role, opposite to well known actor, Pradeep Khadka. Other artists in the film include Anoop Bikram Shah, Sabina Shrestha, Manish Shrestha etc.

A presentation of Suraj Cine Arts Pvt. Ltd., the movie ‘Love Love Love’ is produced by the actor, Suraj Pandey himself. Despite of the director who has directed some good movies in the Nepali film industry, the love story movie wasn’t successful in the box office. The movie ‘Ghampani’ released with this movie took the limelight. The movie was released in April of 2017 (read release news).

SayaRa Sharma, “I am crying while I watch the last scene. Heart touching movie.” 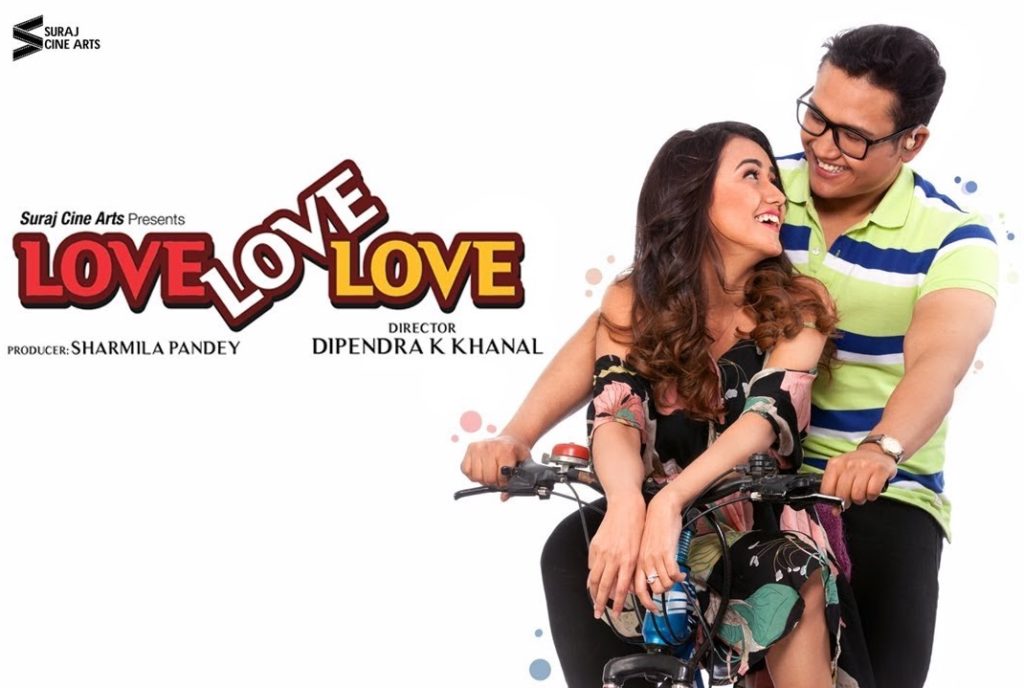 The movie is given a PG certificate, suitable for all the viewers with parents. The movie features some of the most beautiful actresses in the film industry – Sanchita Luitel and Malina Joshi. Malina was the Miss Nepal of 2011. Sanchita was very successful actress before she eloped with Nikhil Upreti. I had written a trailer review about the film earlier.

The movie is a presentation of Aashutosh Films Production and Chandrajyoti Films by Angel Dhungana. The movie features the story and music of Chandrajyoti Dhungana, screenplay by Maunata Shrestha. Maunata has also written the dialogue. The cinematographer is Pawan Gautam, choreographer is Kamal Rai. Editors are Tara Thapa and Kiran Adhikari. Deepak Adhikari is chief assistant director and Bhagawan Poudel is the co-director to director Raju Adhikari. The movie was released during the Valentine Day of 2017.

A movie by Dilasa Creation, the movie ‘Lal Jodi’ is a presentation of Laxman Subedi. Laxman is the writer, producer and director of the movie. The movie features the music of Tanka Budhathoki, lyrics by Dinesh Subedi and Laxman Subedi, singers are Rajesh Payal Rai, Manisha Pokharel, Praladh Timilsina, Yubaraj Chaulagain, Rekha Thapa, and Jyoti Kafle. The movie features the cinematography by Rameshwor Karki, background music and choreography by Ramji Lamichhane, action by Asta Maharjan, editing and color correction by Nabin Niraula. The movie is a fun filled comedy movie. The movie was released in September of 2016. Actress Rekha Thapa had also given voice to one of the songs of the movie.

The movie featuring the superstar actors Rekha Thapa and Sushil Chhetri with Uttam Pradhan and Deepak Chhetri, Lekhanta is directed by Uday Subba. The hair stylist of this movie, Bipana Thapa, is a popular actress who is featured as fake Hisila Yami in popular comedy serials in television, ‘Tito Satya’. In addition to direction, ‘Lekhanta’ is also written by Uday Subba. The movie was previously posted and is updated with a new official link to the movie.

About ‘Love You Baba’

The world record holding movie – directed by the youngest director in the world, Saugat Bista, ‘Love You Baba’ is a story of a father and a daughter. The movie is a family drama featuring the director’s father and his elder sister in main roles.

Read the news about Saugat Bista being awarded the Guinness World Record certificate. The movie was released in December of 2014. The movie was also screened at the Shinokubo Film Festival in Japan in 2015. The actress Sangam Bista was awarded the best child artist at the NEFTA Film Award 2015. The director Saugat Bista was also awarded the Appreciation Award at the same film award ceremony. (Read the details and full list of winners of NEFTA Film Award 2015). The grade 2 student at Suryodaya Secondary School, Saugat Bista was also awarded the scholarship in the school till grade 12 (read news about Saugat’s scholarship at the school).

END_OF_DOCUMENT_TOKEN_TO_BE_REPLACED

About ‘Lawarish’
The movie directed by Niraj Ghimire and produced by Amar Kaushal. The script of the movie is written Maunata Sapkota, music by Basanta Kapkota, action by Himal KC and Manojraj Bhandari, cinematography of Rabi Koirala, and choreography by Shiva Sharma.

The movie by Glaze entertainment, ‘Lukamari’, released on June 24, 2016, is a movie movie made on the story of a tenant in a Kathmandu home (‘Lukamari’ release news). The executive producer of the movie is Col. Madan K.C., co-producers are Sandeep Acharya, Bikram Bhandari, and Tej Man Singh Bhandari. The action director is Asta Maharjan, music by Bikash Silwal, lyrics of the songs are written by Kiran Baral, Bikash Silwal, and Bimal Gautam. Play back singers are Dharmendra Sewan, Prabisha Adhikari, and Bikash Silwal, background score by Bikash Bhujel, choreographer is Renasha Bantawa Rai, editor is Krishna Bhandari, screenplay by Binod Khatiwada, cinematographer is Sushan Prajapati and the producer is Suraj Man Singh Bhandari.

The appearance of Saugat Malla and Karma had been popular even before the release of the movie. Saugat is featured as a Madheshi youth with crooked eyes and Karma is a typical Newar guy of Kathmandu and he has yellow hair. The movie directed by Shree Ram Dahal features and others.

The new Nepali Movie ‘Laley’ is a presentation of Kedar Dhungana for PNP Media House. The movie made on writer Deepak Adhikari features the cinematography of Pawan Gautam. The action director is Kuma Maharjan, background score by Amit Shrestha, and editing by Subash Devkota. The choreographers are Dinesh Limbu and Dhiraj Ale Magar. The music of the songs are composed by Bikash Chaudhari, Dipak Pradhan, Chandra Jyoti Dhungana. The lyrics are written by Pramod Dhungana, Yubraj Aryal, and Chandra Jyoti Dhungana. Mixing is done by Narayana Joshi

Nepali movie ‘Lav Kush’ is a presentation of Ram Krishna Bajgai for Jaya Chamunda Mai banner.
The story of the movie is written by Sunita Baral, (Bajgain), screenplay and Dailouge by Bikash Acharya. Music is composed by Laxman Shesh. Choreography by Raju Shah, action by Rajendra Khadgi, editing by Rajani Pant, background score by Samrat Thapa and cinematography by Bhim Rana.

END_OF_DOCUMENT_TOKEN_TO_BE_REPLACED

The Nepali love story movie by Laya Sangraula, is a popular television serial director. The movie ‘Logne Manchhe’ marks the debut of Sangraula in the Nepali movie industry. The movie is a female oriented film that tells the story of the relationship in a married life.

The movie received an ‘U’ certeficate – suitable for every type of audience. The movie ‘Logne Manchhe’ was released in February 2015.

An action movie, ‘Lakshya’ is a presentation of Om Kiran Films. The movie featuring the music of Arjun Pokharel and Tanka Budhathoki features the background music of Ramji Lamichhane. Ramji is also the choreographer of the movie. The cinematographer is Suman Kumar Tandukar, action by Himal KC, script writer is Sushil Pangani and editing by Banish Shah and Milan Shrestha.